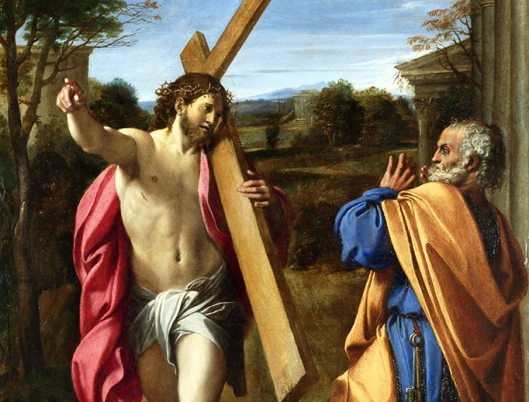 What an astonishing institution the papacy is, that it can bring us so intimately close to the people of the seemingly distant 6th century, & allow us to feel a bond of communion with Rome and Italy in a very different period of agony.

Thus, Tom Holland on Twitter a few days ago.

He is of course correct. There is no other institution which can take us back to the days of the Roman Empire. For Catholics it takes us back even further, to St Peter himself. And if the Church is Eternal and bears the imprint of it Founder, Christ, it also bears the mark of its first leader. In that, it brings it closer to us all.

Is it perfect? No more than we are. Is it, like St Peter, sometimes impulsive, sometimes failing to understand the first time? Well, so are we. Does it mean well but fail to follow through at times? Well, in that it is like us. Nor is this surprising. We are not yet what we shall become through Grace, and whilst the Church is protected from mortal error, it is not, in this world, free from erring, any more than was St Peter. The great error of clericalism was to forget that bishops and priests are also like St Peter too; they can err and stray from the way as can we all. It was the failure to face that fact which allowed the abuse scandal to continue for so long.

Some will object here. We all have in our mind’s eye the Church as it should be; perhaps we also have in the same place an image of how we should be: one day it will be so, through God’s Grace. One reason I can’t join in the arguments about the current Pope is that either the Church is what it is, that is founded by Christ Himself, or it isn’t. If it is then we have His promise that even the Gates of Hell will not prevail against it. If it isn’t, then as St Paul put it in a related context, our faith is in vain. There is no middle position.

I find, and always have found, St Peter a reassuring companion. No organization founded by men would have identified such a fallible figure as its first leader; or if it had, it would never have written about him the way the Gospels do. He is hot-headed. He fails to understand what Jesus is saying, He is vainglorious, promising to stand by Jesus whatever befalls Him, and then denying Him when the heat is on. Peter is all of us. Yet despite that, or maybe because of that, Jesus chose him as the leader of His Church.

Jesus did not write a book of instructions, neither did He have an angel dictate His thoughts to the Evangelists who wrote what we recognise as Holy Scripture. What ‘we’ recognise is what the Church has canonised, and we read it in the light of the teaching of the Church. No merely human institution would have proceeded in such a way, but then, although run by human beings, the Church is not merely a human institution. It is of Divine origin and its purposes of those of God Himself.

It is, in its own way, reassuring to see how like St Peter we all are. It is reassuring because, for all his failings, Christ forgave Him and restored him. We know so little about his later life, but a later story about the end of his life on earth has about it the ring of truth.

The Apochryphal Acts of Peter, finds him fleeing Rome during the Neronian persecution; a perfectly sensible thing to do. Then, at a crossroads,where the Appian Way meets the Via Ardeatina, he meets our risen Lord.

“Romam vado iterum crucifigi.” [I am going to Rome to be crucified again].

Peter then does what we have come to expect of him by now. He turns back to certain death in solidarity with Jesus. To the end he is an example to us all.

The God who is love, the Son who died that we might be saved, the Church which He founded and which is the barque of St Peter want only one thing; that we should turn from sin, repent, and be renewed in Christ Jesus. If this were easy or simple, Christ need not have died for us. If we were capable of doing this without Grace, we should have no need of the Church, we could rely on our reading of the Bible and our feelings. But like Peter and the Apostles, left to ourselves we should err and stray like the lost sheep we are.

Like Peter, we will go astray, but like him, if we listen to the Lord and pay heed to the Church He founded, then we can see the route to our salvation.

During this time of trial each of us has the opportunity, as this Lent draws to an unprecedented close, to decide “quo vadis?” Let us pray for the discernment to behave as St Peter did.

13 thoughts on “The Church and ourselves”