Am I catholic?  It is a question that has occurred to me.  I suppose I am.  The photo belo 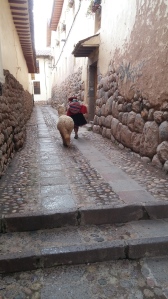 w is of someone I passed by in a backstreet of Cusco, Peru, where I now write from on a flaky internet connection in a cheap and cheerful hostel.  Not the sort of place frequented by middle-class offspring of American or European well-to-do families, buying their faux Andean clothing, and dabbling in drugs, desperate to be a part of some ill-defined ‘cool culture’.  But a hostel occupied by Spanish speakers, a language I only have a passing acquaintance with, who are perhaps indulging in their own journey of sampling what ‘cool culture’ Cusco has to offer. Those who have been here will know what I mean.  However, at the risk of entering into another stream-of-consciousness Tristam Shandy style of writing, I will try to limit my digressions.

But this person in the photograph, is she  catholic?  I never spoke to her, but from a fleeting glance I have made some perhaps ill-educated guesses. She is about 80, from an Andean-Peruvian background, wearing traditional dress, and leading her llama by a small rope.  I also guess that she is catholic.

Yesterday (that’s Sunday), I arrived in Cusco after a marathon of connecting flights from my home in Hong Kong.  It was early morning, and after I had had a chance to dump my bag at the hostel, I wandered around the back streets of Cusco aiming for the main square and the Cathedral, intending to go to mass.  I arrived at about 8.50 a.m. and managed to stroll past the security guard without too much trouble – her job is to keep tourists at bay, to allow the faithful to enter and worship.  Fortunately I was publicly fiddling with my rosary beads when I passed her, a ruse that worked well, but I have recently developed an appreciation for the rosary.  And once inside my senses were overwhelmed.  The art, the music, the devotions, the people.  And it was all in Spanish.

The bishop of Cusco customarily presides at the 8 a.m. mass, and I was able to see the crowds of local people pressing forward at the benediction in hope of getting their share of the holy water that the bishop very liberally showered upon the faithful.   The richness of the atmosphere, packed as the building is, with imagery of biblical scenes and saints, both oil paintings and murals, together with vast amounts of gold and silver (in colour, but I suspect real metal too, in leaf form), and the music – taken together it overwhelmed me.  A choir,  and an organ – this YouTube video is not high quality but captures some of the atmosphere: http://youtu.be/eizdyCkKhIE. I stayed for the 9 a.m. mass.

I have never worshipped before in a language that is not my own. Leaving aside ‘visits’ when I had the mentality of a visitor, such as my participation in the English/Malayalam divine worship at the Indian Orthodox Church seminary on my trip to Kerala, or when a friend in Hong Kong took me to a Latin mass, or periodic dual language services at the Cathedral in Hong Kong where I used to worship when I was an Anglican. But to be a worshipper alone and anonymous amongst other worshippers was not something I have done before.   Of course, I recognised the liturgy – mostly – and managed to mumble parts in English under my own breath at various points.  At the passing of the peace, I was just another worshipper amongst the vast number of Preuvians present.  At the distribution, I was again just another worshipper.  Somehow, yesterday morning was when I realised that I am catholic. Perhaps I have always been catholic, in a sense.

So, perhaps now is the time.  The time to write of my coming to be catholic.  Some people have asked me to write, which is most kind.   So I will write – each person’s journey is different.   One final thing before I finish this blog post by sharing some photos of my confirmation as a catholic at St Anne’s in Hong Kong on 27 December last. I am in Cusco because I am to attend a conference of Quakers – more of which can be seen here: http://fwcc.world/.   And I leave you until next time with those photos:

9 thoughts on “Being Catholic”