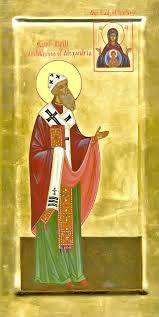 A Prayer of St Cyril

“O most holy Lady, Theotokos, light of my poor soul, my hope, my protection, my refuge, my comfort, and my joy! I thank you for having enabled me to be a partaker of the most pure Body and most precious Blood of your Son. Enlighten the eyes of my heart, O Blessed One who carried the Source of Immortality.

Enlighten the eyes of my heart, O Blessed One who carried the Source of Immortality.

O most tender and loving Mother of the merciful God; have mercy on me and grant me a repentant and contrite heart with humility of mind. Keep my thoughts from wandering into all kinds of distractions, and make me worthy always, even to my last breath, to receive the most pure Mysteries of Christ for the healing of my soul and body.

Give me tears of repentance and thanksgiving that I may sing of you and praise you all the days of my life, for you are ever-blessed and praised. Amen.”

St Cyril of Alexandria (c.376 – 444) was the twentieth-fourth Patriarch of Alexandria in direct succession to St Mark. It is common now to preface any comments about him by saying he was a ‘controversial’ figure. In so far as he took a firm stand for orthodoxy in imitation of his admired predecessor, St Athanasius, and in so far as the modern world is uncomfortable with such certainty, that says more about us than it does him.

That said, he was, even in his own time, a figure of controversy. In so far as all history is coloured in what it selects as significant by its own obsessions, our time tends to focus on his treatment of the philosopher and mathematician, Hypatia. As I have written on this elsewhere here, I shall not add to what is there, but direct the interested reader to it. His battles with the strong Jewish community in Alexandria, and the Roman governor, are a part of the long story of conflict between Christians and Jews, and as Professor Wilken points out in his study, Judaism and the early Christian Mind (1971), Cyril’s quarrel with them was theological, not racial or anti-semitic: ‘The Jews became the natural and inevitable foil for the development of his thought’ (p. 226 of the 1971 edition). As I have attempted to survey the arguments here, I refer those interested in knowing more to that essay.

In the history of Christianity, it is his conflict with Nestorius over whether Our Lady was the ‘God-bearer’ which has taken centre stage. There are essays on this on this blog here, here and here, and elsewhere, so for those interested in the subject, there is much to chew over.

However, we might care to be reminded that St Cyril was not primarily a polemicist and theologian, these were by-products of his day job – that of being a pastor to his flock and an expositor of Holy Scripture. It is a mistake to think that our fathers in the faith were not deeply immersed in Scripture, not least in the Eastern Church in Cyril’s time, where there was a literate population and where argument over what Scripture meant was a commonplace, even in the markets and the streets. In our own time we are beginning to rediscover Cyril as a Biblical theologian, not least his commentaries on St John and St Luke, and latterly, with good editions of some of his many commentaries on the Old Testament. No one can read Cyril without being impressed by how steeped he is in the Bible – his Old Testament references are as many as his New Testament ones. This helps remind us of what Cyril thought was important, as opposed to what modern historians and theologians have found significant about him.

Professor Willken gets it right when he comments (p. 224:

He moves in what we today would call the world of religion – symbolism, metaphor, sacred scripture, liturgy, piety. His thinking is nurtured by a religious tradition and a sacred book; his is primarily a pastor, administrator and an exegete, not a university professor or a schoolman.

Thus after Ephesus, St Cyril continued to write on Christological issues. His three great Christological works: That the Christ is One; The Exposition of the Creed; The Three Books to the Monks, as well as the monumental Against Julian the Apostate all belong to this last period of his life. He died on 27 June 444, just short of his 70th birthday. He was the greatest biblical theologian of his time; one the the greatest of all time. It was fitting that he should have been called ‘The Seal of all the Fathers’.

St Cyril, champion of the Theotokos, pray for us.