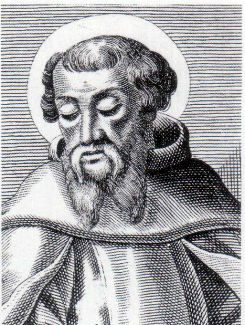 Tertullian is not the only early Church Father who offers us an insight into the place the Bishop of Rome at the turn of the second century. St Irenaeus (d. c.202) mentions Rome in a famous passage which again, until men needed to question what it meant, was taken to mean what it appears to mean:

2. Since, however, it would be very tedious, in such a volume as this, to reckon up the successions of all the Churches, we do put to confusion all those who, in whatever manner, whether by an evil self-pleasing, by vainglory, or by blindness and perverse opinion, assemble in unauthorized meetings; [we do this, I say,] by indicating that tradition derived from the apostles, of the very great, the very ancient, and universally known Church founded and organized at Rome by the two most glorious apostles, Peter and Paul; as also [by pointing out] the faith preached to men, which comes down to our time by means of the successions of the bishops. For it is a matter of necessity that every Church should agree with this Church, on account of its pre-eminent authority,  [The Latin text of this difficult but important clause is, “Ad hanc enim ecclesiam propter potiorem principalitatem necesse est omnem convenire ecclesiam.”].

Pope Damasus (366-84 as Pope), published the following decree, in 382 at the Council of Rome, which set out, more fully, the claims Tertullian had denied:

1. After all these [writings of] the prophets and the evangelical and apostolic scriptures which we discussed above, on which the catholic church is founded by the grace of God, we also have thought necessary to say what, although the universal catholic church diffused throughout the world is the single bride of Christ, however the holy Roman church is given first place by the rest of the churches without [the need for] a synodical decision, but from the voice of the Lord our saviour in the gospel obtained primacy: ‘You are Peter,’ he said, ‘and upon this rock I shall build my church and the gates of hell shall not prevail against it; and to you I give the keys of the kingdom of heaven, and whatever you shall bind upon Earth shall be bound also in heaven and whatever you release upon Earth shall also be released in heaven’.

2. In addition there is also the presence of the blessed apostle Paul, ‘the chosen vessel’, who not in opposition, as the heresies jabber, but on the same date and the same day was crowned in glorious death with Peter in the city of Rome suffering under Nero Caesar; and equally they made the above-mentioned holy Roman church special in Christ the Lord and gave preference in their presence and veneration-worthy triumph before all other cities in the whole world.

3. Therefore first is the seat at the Roman church of the apostle Peter ‘having no spot or wrinkle or any other [defect]’.

I think it is my duty to consult the chair of Peter, and to turn to a church whose faith has been praised by Paul. I appeal for spiritual food to the church whence I have received the garb of Christ … Away with all that is overweening; let the state of Roman majesty withdraw. My words are spoken to the successor of the fisherman, to the disciple of the cross. As I follow no leader save Christ, so I communicate with none but your blessedness, that is with the chair of Peter. For this, I know, is the rock on which the church is built!

The notion that the claims of the Papacy are anything new, or anything to do with some supposed ‘Roman State Run religion’ (@Bosco) is easily disproved by a reading of the Church Fathers. That is not to say that the office has not developed, as, indeed, our understanding of it has done, but it is to say that it has been a part of Christian history from the point at which there is any such thing.

6 thoughts on “The Fathers on the Papacy: Irenaeus, St Jerome”