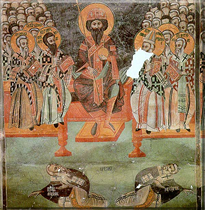 Three main charges are commonly levelled against St. Cyril by his denigrators:
– that he turned up at Ephesus with what amounted to his own private army and stirred up opposition to Nestorius
– that he intemperately started the Council early
– that he bribed the emperor into accepting his version of events

There is a level at which each of these criticisms is extracted from the truth, but done so in a manner which leaves it an empty shell. An understanding of this requires a resort to narrative history for a while.

Nestorius was the first bishop to arrive (he only had to cross the Bosphorus). He turned up with his ecclesiastical supporters, his own armed guard, and that of the prefect, Count Candidian, who was the emperor’s representative. In these circumstances it was wise of Cyril to turn up with his ecclesiastical supporters and their ‘attendants’. McGuckin (p. 56) quotes a letter extant now only in Coptic in which St. Cyril denies the charge of bringing an army, and he says there ‘is no hard evidence’ to suggest Cyril did so. The ease with which Count Irenaeus and Candidian were able to cut off Cyril’s supply lines later supports such a conclusion. Cyril turned up, as Nestorius did, with supporters; what he lacked was the armed support enjoyed by the latter. So yes, it is true to say he turned with with a large entourage; to represent that as an attempt to overawe the Imperial Power is too simplistic.

There  was a good deal of anti-Nestorian sentiment in Ephesus. Memnon, its archbishop, barred Nestorius from communion, and aligned himself with Cyril. To blame Cyril for the unpopularity of Nestorius is to misunderstand the context of the Council. Ephesus was the city where Our Blessed Lady had lived with St. John, and had long been the centre of Marian devotion; that its people would have been hostile to Nestorius was natural – Cyril needed to do nothing save proclaim orthodox belief to receive support.

The Council was due to convene on 7 June 431. Cyril delayed it for two weeks as many delegates, including those from Rome and Antioch, had failed to meet that deadline. The hot weather and the strain on the food resources of Ephesus took its toll on those delegates who had arrived. When Cyril received information that the Antiochenes would be delayed a while longer, he summoned the Council together. He suspected, and not without cause, that John of Antioch did not want to be there when Nestorius was deposed; the evidence is sifted at McGuckin pp. 66-68.

Should Cyril have waited longer? Perhaps, but since he had no idea when, if ever, the other delegates might arrive, he decided a fortnight was sufficient.

The First Session began on Monday morning, June 22nd, at Saint Mary’s Cathedral, with Cyril presiding; Peter, an Alexandrian priest, was appointed as the chief legal notary. There were 155 bishops present, of whom 68, led by Theodoret of Cyrus, came to protest against the decision to open the Council. Count Candidian came with them and declared the meeting illegal. St. Cyril asked him to read the letter of the Emperor. This had a double purpose. It revealed a clear instruction to the Count from the Emperor to refrain from interfering in theological discussion. By reading the letter, the Count had, in Cyril’s opinion, opened the Council in a formal sense. After hearing the letter, the bishops asked the Count to leave the meeting and not to interfere in the work of the Council. Count Candidian then left, followed by Theodoret and 26 of the 68 dissident bishops. The remaining 42 bishops stayed.  The meeting went on to summon Nestorius, something repeated the following day, and when he refused to attend, he was deposed.

St. Cyril’s description of the reaction of the great crowd outside to this event is worth repeating:

“When they heard that the wretched men were deposed, they all began with one voice to cry out in praise of the Holy Council, glorifying God because the enemy of the Faith had fallen.”

The people had spoken; the bishops had spoken; but would that be enough for orthodoxy to prevail?

Before turning to that, I want to take a moment to look at how Cyril opened the Council, as it will help us understand how he saw Our Lady in the economy of salvation.

32 thoughts on “Fighting the beasts at Ephesus”