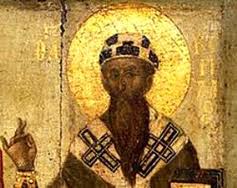 One of the main shortcomings of Gibbon’s approach, is that in failing to understand what Cyril thought was at stake, he misses the real criticism which might be, and was, levelled at Cyril, and it is one which nearly wrecked the Council – and the unity of Christendom.

Cyril’s Third letter was a sound statement of orthodoxy. If he had left things there he would have saved himself much trouble; but he did not. The Twelve Chapters which accompanied them could be read as an uncompromising attack on the whole Antiochene school. One rule of thumb always works; when something can be read as an attack, it will be. Nestorius sent the Chapters to John, bishop of Antioch, who, prompted his two leading theologians, Andrew of Samosata and Theodoret of Cyrrhus to fire counter-blasts at Cyril. (McGuckin, pp. 44-4)

Some good would come from the subsequent epistolary warfare, although not in time for the Council. Andrew and Theodore both accused Cyril of Appolinarianism, that is of believing that Christ did not have a human soul but was a man with a divine soul, and therefore not man at all. This could certainly be one reading of the theopaschite language used by Cyril ‘God died in the flesh’; but it was a misunderstanding of the paradoxical language which Cyril loved to use. Both Theodore and Andrew hammered out an expression of the Antiochene position which made it less liable to be taken as adoptionist; that is that Our Lord was a man whose form was infused by divinity, but not, itself, divine.

But if the controversy forced the Antiochenes to clarify their position, the same was true for Cyril. His language had left him open to the charges laid against him, and his answers in treatises Response to the Orientals, and To Euoptus, while they dealt with the charge of Appolinarianism, did not quite provide an answer to the key question at issue. Should Jesus be ‘properly and distinctly viewed as a human individual (a Jewish man) or whether he was the divine Son in person (God).’ (McGuckin, p. 49). The Theopascite language had been meant as a paradox to show the mystery of the mode of union between the divine and the human – that is it was as such that ‘God died’. But Cyril would have to do better than that.

Cyril knew that God had become man and died for us, and on that point he would not yield; it was that which he took Nestorius to be challenging by denying to Mary the title of God bearer. But he also came to realise that he would need to do more work to explaining the way in which the humanity of Jesus was not simply a cypher.

However, the calling of the Council at Ephesus would both cut across this work, and make the urgency of it the more acute. At Ephesus Cyril, like St. Paul before him, would be fighting with the beasts.

2 thoughts on “St Cyril: how to write about God”