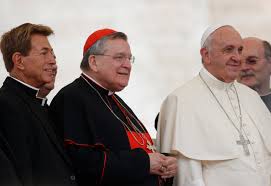 A great deal of fuss has been made about the ‘Dubia’ from the four cardinals to the Pope and his refusal to answer them. Readers of the Catholic press  will be familiar with the divisions over Amoris Laetitia. They concern the moral law, the nature of the sacraments and the authority of previous teaching. But it comes down to the question: can remarried Catholics receive Communion if they aren’t living as brother and sister? The Church has always been clear that the answer to this is ‘no’, but it is equally clear that pastoral practice has varied, not least in the sorts of circumstances people find themselves in in a society where late conversions are common and civil divorce very easy. These are new circumstances and for the representatives of the Church simply to insist on a binary answer which would fit all cases, might lead to injustice; but for the Pope not to reply might risk another sort of injustice, in which the faithful look up and are fed stones.

Whatever answer to Pope gave, it would seem unlikely to change the reality at parish level. We are told that the use of contraception among Catholics is common, and yet, if one looks at the lines for Communion and one took them at face value, you’d not suppose that at all – quite the opposite. In the end the individual knows their situation, as does their confessor, and to pronounce in the abstract would simply to be to assert what no one has challenged – which is that the recent Synods did not change the teaching of the Church with regard to communion for the divorced, however much some would like to to have done so, and however much those who would have liked this claim it has. This is a matter on which the teaching of the Church is clear, and where pastoral practice clearly varies. It is not the only such issue.

No doubt those calling on the Pope to say something more have their reasons for so doing, and no doubt the Holy Father has his reasons for not responding. For the individual Catholic, it is hard to see what is unclear. Those who wish for clarity have already found it in pastoral practice, which varies according to what the confessor knows of his flock; this is right and proper. The Church is not a penal colony, it is a field hospital in a world where Sin is injuring and has injured many Faithful. Those who want clarity have it in the age-old teaching of the Church; if they wish to apply it to every individual regardless of circumstances then, to use a word much beloved of the Pope, that would seem a trifle ‘rigid’. So the Holy Father may be showing much wisdom in letting things lie where they are, because in practice, it is the individual conscience which knows where truth lies, and if that conscience is formed well by the confessor, then we can be sure that what is done is what ought to be done.