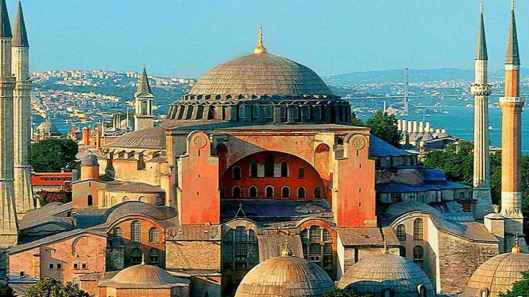 A little over three years ago Chalcedon described the last day of Constantinople. I have nothing to add to his moving account, which is here.  Some of us of Anglo-Saxon and Scandinavian stock may remember 29 May 1453 as the day when Emperor Constantine XI dies amongst his household which included the Varangian Guard, his personal guard recruited from Scandinavia since Viking times and joined by Anglo-Saxons after the Conquest of England. Truly was Constantine reputed to have told his nobles and his household both that:

Constantine told his hearers that the great assault was about to begin. To his Greek subjects he said that a man should always be ready to die either for his faith or for his country or for his family or for his sovereign. Now his people must be prepared to die for all four causes.

He spoke of the glories and high traditions of the great Imperial city. He spoke of the perfidy of the infidel Sultan who had provoked the war in order to destroy the True Faith and to put his false prophet in the seat of Christ. He urged them to remember that they were the descendents of the heroes of ancient Greece and Rome and to be worthy of their ancestors.

For his part, he said, he was ready to die for his faith, his city and his people

But Constantinople and it’s wondrous cathedral, Hagia Sophia, the Cathedral of Divine Wisdom of the title. had been on the front lines of the jihad for centuries. Indeed Mohammed himself lusted after the city, which capturing would open the road into Europe.

Raymond Ibrahim wrote last week in FrontPage Magazine about one, perhaps the greatest effort to capture the city, and it’s Cathedral.

At the head of 120,000 jihadis, Maslama crossed into Christian territory and, with “both sword and fire, he put an end to Asia Minor,” wrote a near contemporary chronicler.   On August 15, 717, he began bombarding the city, which was defended by Leo III, formerly a general.  Just weeks earlier, and because he was deemed the ablest man, Leo had been consecrated in the Hagia Sophia as new emperor.

Unable to breach the cyclopean walls of Constantinople, Maslama waited for 1,800 vessels containing an additional 80,000 fighting men to approach through the Bosporus and completely blockade—and thus starve—the city.

Suddenly Leo ordered the ponderous chain that normally guarded the harbor cast aside. Then, “while they [Muslim fleets] hesitated whether they should seize the opportunity . . . the ministers of destruction were at hand.” Leo sent forth the “fire-bearing ships” against the Islamic fleet, which was quickly set “on fire,” writes Theophanes the chronicler: “some of them were cast up burning by the sea walls, others sank to the bottom with their crews, and others were swept down flaming.”

Matters worsened when Maslama received word that the caliph, his brother Suleiman, had died of “indigestion” (by reportedly devouring two baskets of eggs and figs, followed by marrow and sugar for dessert). The new caliph, Omar II, was initially inattentive to the Muslim army’s needs. Maslama stayed and wintered in.

Unfortunately for him, “one of the cruelest winters that anyone could remember” arrived, and, “for one hundred days, snow covered the earth.” All Maslama could do was assure his emaciated, half-frozen men that “soon! Soon supplies will be here!” But they did not come; worse, warlike nomadic tribesmen known as Bulgars—whence the nation of Bulgaria—accustomed to the terrain and climate began to harry any Muslim detachment that left the starving camp in search of food.

By spring, Muslim reinforcements and provisions finally arrived by land and sea. But the damage was done; frost and famine had taken their toll on the Muslims encamped outside the walls of Constantinople. “Since the Arabs were extremely hungry,” writes Theophanes, “they ate all their dead animals: horses, asses, and camels. Some even say they put dead men and their own dung in pans, kneaded this, and ate it. A plague-like disease descended on them, and destroyed a countless throng.”

I’ve little to add to his account, it’s well out of my field, but he wrote a fascinating article on it that I urge you to read.

But I can read a map, and Constantinople blocked the easiest route into Europe, thus blocking the easy early conquest. Not long after this Charles Martel, at the Battle of Tours blocked the western path up through what is now Spain. Thus in the eighth century was Europe saved for all we know to develop.

In the sixteenth century, the twin battles of the Siege of Warsaw, featuring King John Sobieski and his cavalry, and the naval battle of Lepanto, again checked aggressive Islamic moves on Europe.

This allowed the modern world we know to develop, with all the advances we have made.

Malcolm wrote about his visit to Hagia Sophia here.

I wrote about the amazing acoustics designed into the cathedral here.

The Cathedral of Divine Wisdom indeed.

6 thoughts on “The Cathedral of Divine Wisdom”