junia, women in the early church 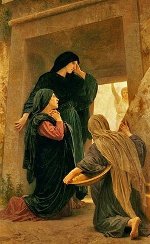 It’s a long time since I wrote here, but Chalcedon’s typically kind republication of my little piece on the women at the tomb, and Audre’s lovely piece on the woman at the well prompts a few thoughts to share.

Too much of the commentary on women in the Gospel has been skewed by an almost feverish (often androcentric, but not wholly) desire to explain away what it means to call someone like “Junia” an “Apostle.” It was almost amusing to see the extent to which some of the comments on C’s essay on Junia went to deny the obvious literal reading, which is that a woman called Junia was “prominent among the Apostles”. If I just list the Church Fathers who all acknowledged the fact that “Junia” was a woman and an Apostle, it comes to the sort of list that, if I was using it to illustrate that (as they are) the consecrated bread and wine are the body and blood of Jesus in a way not to be defined), traditionalists would be quick to say ‘there, look at that witness from the Church’; odd how it doesn’t work in Junia’s case. C quotes Ambosiaster (I’m not, by the way criticising him for not including all the others, just doing it myself), to which can be added Origen, Jerome, Chyrsostom, Theodoret and John of Damascus. Of course, you can (as others have in other cases) argue that they all got it wrong, and that it wasn’t until the twelfth century that it got put right; but I sort of feel that in any case other than one concerning women, traditionalists would be the first to say how jolly unlikely that one was! I especially love the example of A.C. Headlam in the late nineteenth century who wrote wrote that the fact the name was borne by an Apostle was decisive: ‘In that case it is hardly likely that the name is femine.’ Not one, then, to let the fact there is no known example of the name ‘Junias’ known in antiquity, get in the way of a conclusion he’d already drawn!

I wonder whether some of this isn’t the fault of women ourselves? How so? We’ve usually gone down this route to argue the case for women’s ordination. In my church that’s a done deal and in our special Anglican way we’ve managed to rub along, on the whole, nicely, so for me that’s a done deal, and those who don’t want it, fine, not my church, not my issue. I say this not to say it doesn’t matter, it does, but to wonder how it looks if we set it aside and ask what role women played in the early church?

How likely, for example, is it that in Jewish and Roman society a mission largely carried on by men would have done what we know it did, which was to bring in many women? It’s always interested me, because I’m as guilty of it as anyone, when the argument is used that the fact that the testimony of women is used by the Gospel writers is a decisive argument in favour of it being true that the tomb was empty, because the testimony of women was not acceptable in Jewish law. Pardon my laughter. No doubt it wasn’t, but the idea that women would ever have gone, ‘oh, you know, it was only a woman who saw that Jesus rise from the dead, so it must be true,’ is to ignore that, to women hearing the story, there would be no such impediment. Apart from anything else, the testimony was not actually being used in courts of law, so I’ve never been clear this mattered as much as we sometimes think. Why then was it used, because it’s right to say it would cause doubt in some quarters.

It’s certainly true that the ancient world shared the view still common in some parts of the modern world that women are a bit gullible in religious matters and prone to hysterical superstitious fantasy (guilty as charged m’lud!) Origen records the awful Celsus, that pagan hater of Christianity, as commenting thus about Mary Magdelen: ‘after death he rose again and showed the marks of his punishment … but who saw this? A hysterical female as you say, and perhaps some other one of those who were deluded by the same sorcery?” But it’s unlikely women shared that view of each other, and it may well be that those women we see in Luke who travelled about with Jesus along with the twelve, played a role in evengelising their own sex.

One reason for emphasising the testimony of women may well have been that those women Luke mentioned remained prominent in the early church. Richard Bauckham has written interestingly about how “Junia” and the “Joanna” mentioned by Luke may well be the same woman, and we know from Paul that women played a prominent part in the early mission of the church. What would be more likely then than mentioning the women because they were well-known in church circles? Mary of Clopas may well have been the mother of Symeon, who succeeded James as head of the church in Jerusalem, if so, mentioning her would have been a powerful testimony in the early church. As Bauckham puts it: ‘they surely continued to be active traditioners whose recognised eyewitness testimony coud act as a touchstone to guarantee the traditions as others relayed them and to protect the traditions from inauthentic developments.’ Which nicely links up with C’s essay on women as protectors of tradition, on which note, I’ll stop wittering and hope that, like me, you’re all managing to survive this ghastly plague. Prayers for you all, anyway.