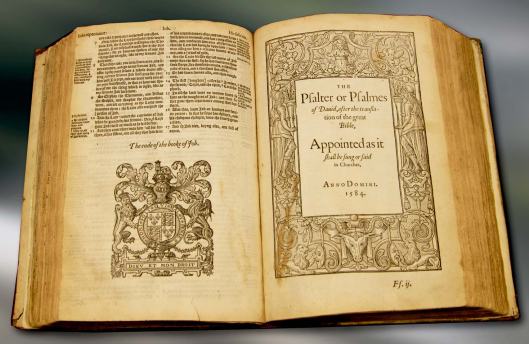 How do we know what is “Scripture”? Despite the ingenious answer of our long-time commentator, Bosco, that “it’s in the contents page,” that is not the right answer. Indeed, one question we need to pose at the start is whether the Evangelists knew that they were writing “Scripture”? Even before that we need to ask how we know who wrote the Gospels? Since the answer in both cases is “the Church” we also need to know what that means? This is not just to combat the anti-Catholic gut instinct which recoils from the idea, but also to combat the conspiracy theorists who claim that we owe the Bible to some nefarious work under the Emperor Constantine.

The first thing to note here is that when the Evangelists wrote they knew what they meant by “scripture”, it was what we call the Old Testament. The Law, the Prophets and the Writings, the three divisions of the Hebrew Bible were at the heart of Jewish culture and all Jews would have been versed in them. We know that about 85 A.D. there was a council at Jamnia which decided what books were canonical, but most scholars agree that simply ratified long practice – something which, as we shall see, was true of what we call the New Testament too.

The first part of Jewish Scripture, the Pentateuch, the first five books of the Old Testment were substantially complerte by the fifth century B.C., but may date back even earlier. The Prophets and the Writings date back to about 165 B.C. As the Jewish author Josephus, writing in the first century AD. put it: “We do not possess  myriads of inconsistent books, conflicting with each other, our books, those which are justly accredited, are but two and twenty.” At Jamnia there was a pruning process which excluded writings classed .as apochrypha. There were two common forms of Scripture.

Some time in the third century BC. the large Jewish population in Alexandria produced what we call the Septuagint, that was a Greek translation of the Jewish Scriptures designed to meet the need of the already numerous diaspora. The original Septuagint included only the Books of the Law, the rest of the Old Testament was translated by the early Christians as a service to those coming to the Faith.

The Jews regarded these books as inspired by God and the list of books was seen as a rule of faith – the Greek kanon means a measuring rod or a rule. It was not until the fourth century AD. that the word came to be used to describe the list of Christian books which contained the rule of faith. To be clear, the Canon reflected a consensus on the books already in circulation in the early Church, and as at Jamnia, the Canon reflected the choices made by that Church. There was no grand Council at which learned men argued the case for book x or book y, there was no choice between the “Gospel of Thomas” and the “Gospel of Mark” at which the latter was accepted and the former rejected; what they was instead was a recognition of what the early Church considered to be the Canon, or the rule of faith which summed up Christian teaching. That is a vital point to bear in mind. What we call the New Testment did for Christians what the Old Testament did for the Jewsm which is to act as a summary of Christian teaching; the Old Testament books had also been accepted for the same reason, they were vital to understanding what one writer called “the memoirs of the Apostles.”

It is, as so often, St Paul, in the earliest of the writings which comprise the Canon, who sets out its purpose. Writing to the Colossiansas early as thirty years after the crucifixion, he tells them that Jesus is “the image of the God we cannot see”, the “one by whom all things were made” and for whom they were created. He tells the Corinthians that they are the “body of Christ,” and that, as he told the Colossians, Jesus is the Head of that Church: “For in Him dwells all the fullness of the Godhead [f]bodily; 10 and you are complete in Him, who is the head of all [g]principality and power.” Even earlier, in the 50s, Paul had told the Philippians that:

Christ Jesus, 6 who, being in the form of God, did not consider it [b]robbery to be equal with God, 7 but [c]made Himself of no reputation, taking the form of a bondservant, and coming in the likeness of men. 8 And being found in appearance as a man, He humbled Himself and became obedient to the point of death, even the death of the cross. 9 Therefore God also has highly exalted Him and given Him the name which is above every name, 10 that at the name of Jesus every knee should bow, of those in heaven, and of those on earth, and of those under the earth, 11 and that every tongue should confess that Jesus Christ is Lord, to the glory of God the Father.

What a huge claim! But that is what the early Christians believed, it was not added later by others, it was there from the start. We see it in St Mark’s opening words: “The beginning of the gospel of Jesus Christ, the Son of God. St Matthew is at pains to point out in his first chapter that Jesus’ name means “God with us.” We see the same in Luke and John. This was the dinstinctive Christian message – all authority on Heaven and Earth had been given to Jesus – He is Lord and God. That being so, the followers of Jesus saw His words as Scripture and naturally did what the Jews had done with the Old Testament, they wrote down His teachings. It has been plausibly argued that Paul’s first letter to Timothy is the first sign that Christian writings could be considered Scripture.

The idea of the Canon was there from the start in the form of what we call the Old Testament, and such was the impact of the Risen Christ that His early followers accorded the same status to the writings of the Apostles – and it is to that we turn next.