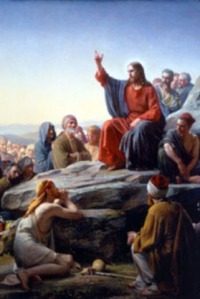 A word of explanation from Neo. For some months, as many of you know, at NEO, I have had a new co-blogger. Audre Meyers. She brings something to my blog that it has missed since Jessica left, a lighter touch, perhaps a woman’s touch, and a bit of wandering off the reservation, which is needed.

The other day, she sent me a very pleasing draft, about a lesson from her Bible study group led by her priest. She is a Continuing Anglican, essentially an American Amglo-Catholic, and it shows. Her draft recalled something to me, which took some time to place. This is it. In it, she strikes many of the same notes that Jessica did in her best posts. Well, at least one of my commenters has remarked that she thought Audre was Jessica in disguise. She’s not but they do share an outlook and a style which I find very refreshing.

In any case, as I read her draft, I came to the conclusion that it belongs here, not on NEO. NEO too, has an underlying Christian ethos, but is far more political, and likely will continue as such at least until the election. Audre finds this collection of curmudgeons intimidating (I can’t imagine why!) something about the way we speak our minds clearly and robustly, I think. But I think we all also listen to that still small voice in our hearts and souls. That’s where I think Audre’s viewpoint comes from.

Eventually, I convinced her to let me post it here as sort of a guest post. So be nice to her, she’s my friend as well as co-blogger. Here’s Audre!

I’ve read my Bible front to back many times throughout the years. While I’m not good at quoting chapter and verse numbers, my understanding of what I’ve read is pretty sound. So imagine my surprise at Bible study yesterday when our priest gave a new insight into what we were reading in the Book of John.

The chapter is 3 and the verse is 30. “He must increase and I must decrease” (KJV)

This is obviously John the Baptist explaining to his followers, his disciples, that Jesus is the Man and he, John, just the herald; that he will be eclipsed by Jesus and that Jesus is the One to follow. Simple. Read it quick and move on. But what our priest suggested brought me to a screeching halt. He said he is impressed with John’s great humility. Humility? Our priest, Fr. Ellis, pointed out that John was very popular and had a fairly large following; he was, in effect, telling his followers that they must now follow Jesus and he himself was not the one they should be looking to. I hadn’t thought of the common, very human trait of ‘pride’ – there had to have been, within John, a sense of being important and noteworthy. Here he was, the momentary Elvis and all that it implies, saying,  “I’m not going to sing anymore because you need to listen to Roy Orbison whose voice is way beyond that of mine.” Who does that sort of thing? Who walks away from fame? A very, very humble soul.

But here’s the concept that rocked my boat. Fr. Ellis stated that the verse applies to us. Head snap. What? The verse applies to us today and forever. We are to decrease and Jesus is to increase. How is that so? We are so self-centric; life is, after all, all about us. Individually. What I want, what I need, what I like, what I think, what I have. The ‘great’ imperative. Me. We lament that our prayers aren’t answered, that things aren’t going our way, that we want change and we want it now. But He can only act in our lives when we give Him room. We believe we are the masters and captains of our lives and as such, we blunder, fail, hurt ourselves, hurt others, have a skewed perspective of the world around us. Just take a look at the world if you don’t believe me.

Things ‘come right’ when we decease. When we start to chip away at the ‘me’ and start to open up to Him. If we decrease, we open up space for Him to come in and fill us with all the love of the Father and all the aid and comfort of the Holy Spirit and a greater, deeper, sustaining relationship with Jesus.

So verse 30 applies to me – to us. I MUST (not a random word choice, it’s highlighted in the KJV by the format of the word)

I MUST decrease and He MUST increase.

Verse 30 is an instruction.

As St. Cyril said:
“If the poison of pride is swelling up in you, turn to the Eucharist; and that Bread, Which is your God humbling and disguising Himself, will teach you humility.”