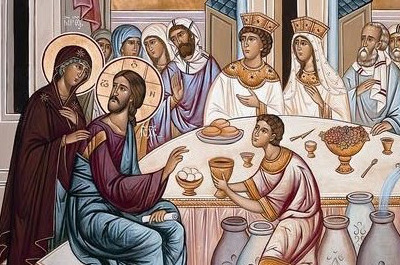 What Jesus did here in Cana of Galilee was the first of the signs through which he revealed his glory; and his disciples believed in him.

If His baptism was the first public revelation that Jesus was the Light of the World, then the wedding at Cana was, as St John tells us, the first of those signs through which His glory was revealed. What illumination does it offer us as we meditate on it when praying the Rosary?

We note signs that point to a wider resonance. The wedding took place on “the third day”. We know that it will be on the “third day” that Christ will rise again from the dead, marking the ultimate triumph of Light over darkness. But the Evangelist hints that this third day was the seventh of his opening week of Ministry, which, of course, put us in mind of the story of the Creation. The Word who was in the Beginning, is also here when the world is transformed through His redeeming love.

Love, is, of course, something we naturally associate with a wedding, even if that was not necessarily the case in ancient times, and so for us, we see something very relevant to our own times, that love is sanctified by God. The Word Incarnate blesses the occasion with His presence and joins in the joy and the happiness – and, thanks to the intervention of His mother – ensures that an embarrassing mishap which could have spoiled the day was not allowed to do so.

And yet Jesus’s reply to Mary pointing out that the wine was running low seems rather curt. Whichever translation of the Greek one prefers, calling your mother “Woman” and asking her what the situation had to do with them sounds a little impolite. Yet Jesus responds to her advocacy, which may be the message we need to receive. But if we look a little closer, we see the first of seventeen reference in the Gospel of St John to the “hour” coming.

It is clear from the first half of the Gospel that this means that despite the attempts of His enemies, no harm can come to Jesus. It is not until the start of the week of the Passion that Jesus’ “hour” will come. However much we may say, like Peter, that we can drink the cup that He will drink, in practice, like Peter, we will be found wanting. But there is the illumination we need. We should not do as Judas did and in despair, abandon hope, instead we should do as Peter did, even if that is just getting on as best we can with our lives and being open to Christ, who has never stopped loving us, even when we have given up on ourselves. The time will come, Jesus says, when “the dead will hear the voice of the Son of God and those who hear will live … those who have done what is good will rise to live, and those who have done what is evil will rise to be condemned.”

Mary is the pattern for our response to Jesus when she tells the servants to do as He tells them. Because we know the outcome it is easy for us to forget how strange His words must have sounded. The big stone jars were not just full of clean water stored in case anyone got thirsty, they were there for ritual cleansing, and so in all probability the water in them was far from fresh. Like us, the water was impure and perhaps, even foul. But, like we have been, are being and will be, it was transformed by Christ. If we are brought into mind of Jesus telling us that the wine He consecrated at the Last Supper was His “blood,” then we get the connection that His blood saves.

Mary does not respond negatively to the words of her Son, nor should we. She sets an example and after her intercession, shows that perfect obedience is perfect service. In that service the Light of the world is revealed, and we have His first sign. Jesus responded to His mother’s intercession, and if we, poor banished children of Eve intercede through her, then we have cause. “Do whatever He tells you,” she told the servants – and we should go an do likewise.