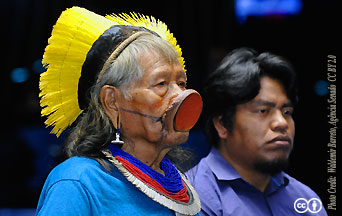 In the Instrumentum Laboris for the upcoming Amazonian Synod, we see Liberation Theology at its worst in its teaching of ’Tribalism’ but also its blind hypocrisy which is evident throughout the document.

For the topic of its socialist teaching on Tribalism, I would refer you to the insightful interview with Prof. Thomas Stark over at Lifesite News: https://www.lifesitenews.com/news/catholic-philosopher-amazon-synod-working-doc-promotes-most-dangerous-form-of-socialism

As to the hypocrisy in the documents I will simply point out one for your consideration.

“78. The family in the city is a place of synthesis where traditional and modern cultures meet. However, families often suffer from poverty, precarious housing, lack of work, increased consumption of drugs and alcohol, discrimination and juvenile suicide. In addition, there is a lack of dialogue between generations in families; traditions and language are lost.  [. . .]”

It is obvious that since the opening of the windows of Vatican II we essentially allowed this ‘synthesis’ to take place within our Catholic Culture as well. And we are now seeing what happens when Modernist cultures meet the Traditional Culture that developed organically over the last 2000 years. The people are leaving in droves and they are losing their faith and our youth are committing spiritual suicide.

Note that the synod is against this transition of the traditions of these tribes but is all for throwing away our own Catholic traditions; as later in this document you will also read that they suggest ordaining married men and women.

It is also apparent that they lament the loss of traditions and language (as they also spoke highly of incorporating traditional music, songs and symbols to be incorporated in their liturgical worship) and yet are oblivious to the self-same destruction they brought upon the Catholic Church after Vatican II.  Did we not simply chuck our Traditions without being consulted? Didn’t they just foist change upon change upon us; destroying the Holy Sacrifice of the Mass and now haven’t we lost most of our uniting traditions like our songs of worship plus our Latin language? They seem to be blindly hypocritical.

This document tells us how these tribal groups can help inform our faith and that they should not lose their creation legends and such; these should be enriching to our own belief somehow. So are they going to next have us research the pagan societies from which the Jewish people emerged so that we can embrace those old practices as well? Should we delve into the occult and black mysteries associated with our lost traditions and origins?

I was not sure when I read this preparatory document for the Amazonian Synod whether it might not have been ghost written by Jeffrey Sachs, George Soros or some college professor of their ilk. If I had not read this document for myself I would not have imagined that the Catholic Church would ever actually write a document of such low-grade thinking and filled with so much heretical thought. But then this is what we deserve for allowing these abuses to be forced down our throats one by one all these years.

Furthermore, isn’t it true, for all your griping and wailing over the exploitation by the Capitalists upon these poor tribes, that this is precisely what you yourselves have been doing to the Catholic people for years? We have been raped, ravaged and all of our spiritual resources have been depleted and polluted by whom? You, of course.

Hypocrites, one and all.