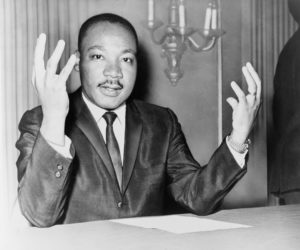 Today is Martin Luther King Day in the United States, In that spirit, I offer you a sermon of the Baptist M.L. King as presented by Msgr. Charles Pope of the Archdiocese of Washington.

Among his recorded sermons is one in which Dr. King addressed the problem of unbelief, of materialism and atheism. His reflections are well worth pondering today because the problem is even more widespread now than it was when he made these remarks in 1957. A complete transcript of the sermon is available here: The Man Who Was a Fool.

In this sermon, Dr. King commented on Jesus’ parable of the wealthy man who had a huge harvest and, instead of sharing it, just built bigger barns to hold the excess. The Lord called him a fool for thinking that his material wealth could provide security.

Following are excerpts from this sermon, with Dr. King’s words shown in bold, black italics and my comments displayed in plain red text. After discussing several reason why the man was a fool, Dr. King said,

Jesus [also] called the rich man a fool because he failed to realize his dependence on God. He talked as though he unfolded the seasons and provided the fertility of the soil, controlled the rising and the setting of the sun, and regulated the natural processes that produce the rain and the dew. He had an unconscious feeling that he was the Creator, not a creature.

Having discovered the inner realities of many processes, the materialistic atheist fails to ask more fundamental questions such as “Where does the cosmos ultimately come from?” and “What is the ultimate destiny of all things?” Having found some answers, he mistakes them for the ultimate answers; they are not.

There is no problem with a scientist saying that these sorts of questions lie beyond science, that science is only focused on material and efficient causality. Each discipline does have its area of focus. The error of scientism is in its claims that science alone explains all reality; it does not.

The usual response of those who ascribe to scientism (not all scientists do) to questions that science cannot answer is to dismiss them or to say that one day science will find an answer. When we, who are obviously creatures and contingent beings, dismiss our Creator, we are displaying either hardness of heart or a form of madness. Such a dismissal is neither rational nor reasonable.

This man-centered foolishness has had a long and oftentimes disastrous reign in the history of mankind. Sometimes it is theoretically expressed in the doctrine of materialism, which contends that reality may be explained in terms of matter in motion, that life is “a physiological process with a physiological meaning,” that man is a transient accident of protons and electrons traveling blind, that thought is a temporary product of gray matter, and that the events of history are an interaction of matter and motion operating by the principle of necessity.

Dr. King describes here the problem of reductionism, in which things are reduced to matter alone and attributed entirely to material causes. This view holds that even concepts such as justice, meaning, and beauty must somehow be explained materially in terms of their cause. The human soul that knows immaterial things does mediate its thoughts through the brain and the central nervous system, but it does not follow that the medium is the cause. It does not pertain to matter to be the cause of what is spiritual.

Having no place for God or for eternal ideas, materialism is opposed to both theism and idealism. This materialistic philosophy leads inevitably into a dead-end street in an intellectually senseless world. To believe that human personality is the result of the fortuitous interplay of atoms and electrons is as absurd as to believe that a monkey by hitting typewriter keys at random will eventually produce a Shakespearean play. Sheer magic!

Many atheists think they have solved this conundrum, but I think that they “solve” it with a set of assumptions so outlandish and unproven that it requires far more “faith” to accept them than to believe in an intelligent designer and creator.

The statistical possibility that things could come together “by chance” to form complex life—let alone intelligent life—and not just once but at least twice (for reproduction’s sake) is minuscule! (As Dr. King says, “Sheer magic!”) Those who demand we accept this explanation are far more credulous than are believers, who observe the intricate design of creation and conclude (reasonably) that there is an intelligent creator.

Read it all at: A Reflection on a Sermon of Dr. Martin Luther King, Jr. Refuting Atheistic Materialism.

An interesting example of what we try to do here, and decidedly on point. Presented by a Lutheran, from a Catholic source, of a Baptist sermon, and all orthodox both to our churches and each others’.