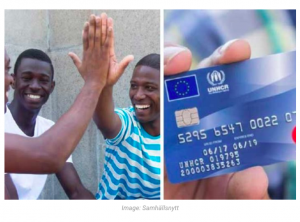 Between the UN, the EU, MasterCard and George Soros, the genocide gets its funding for this extermination of cultures. What was tried successfully by the Catholics was suicide of their 2000 year old culture and the world’s elites have now set their sights on Western Civilization itself.

Bergoglio is not only a participant but a cheerleader in the destruction of  both. Anyone who does not get this is bound to wake up far too late to put a stop to it.

Read more below and let’s open our eyes to what these last 50 years have brought us. Like frogs in water slowly going from tepid to boiling, we have been stroked and cajoled to believe our political and religious elites and now we are at the breaking point. In fact, it may be too late already. But just so you are aware, I offer the following two stories for your education. __ Scoop

SUGGESTION: If you haven’t done so already, every man and woman of integrity should destroy their MasterCards and replace them with another credit card. If you have MasterCard in your portfolio, you should divest yourself of any said holdings. These people are evil. I, for one will not participate in their genocide. __ Scoop

36 thoughts on “Two accounts that will be ignored by almost everyone: cultural genocide and cultural suicide is now commonplace”