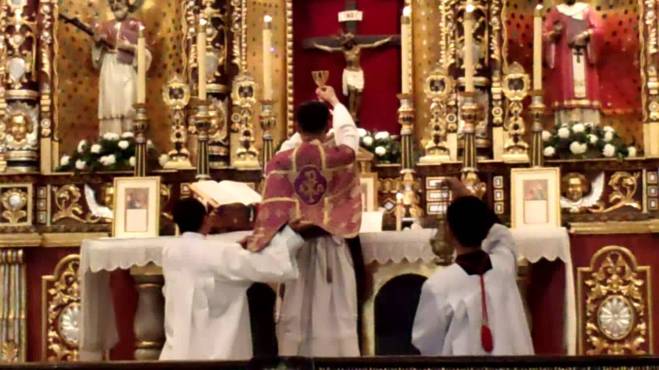 ‘Look not upon me’, says the Beloved, the Church. ‘For the sun hath looked upon me.’ Labouring in the vineyard has darkened her skin; she is conscious that her beauty is hidden. She says: ‘I am black but beautiful’. (Song of Songs, 1:5, 4)

Christ also, the spotless Lamb, was disfigured, by his enemies. Isaiah says of Him in prophecy: ‘there is no beauty in him, nor comeliness: and we have seen him, and there was no sightliness, that we should be desirous of him’ (Is 53:2). But again, Christ’s beauty is hidden, rather than lost.

What has happened to the Church in the last 50 years and more is a disfigurement, a disgrace. Like the Beloved of the Song of Songs, the Church has been cast out of doors without her veil:

‘The watchmen that went about the city found me, they smote me, they wounded me; the keepers of the walls took away my veil from me.’ (Song 5:7)

The defilement of the Church is real in one sense, and only apparent in another. As a human institution she can be wounded and shamed. As a divine institution she cannot. She is both human and divine, a mirror of Christ, who in His humanity truly suffered and died. This suffering was not unreal or superficial: the betrayal, the stripping naked, the being spat upon, the being tortured and killed. It is profoundly real and of the greatest significance. And yet Christ in his Divine nature, and the Church as the Mystical Body and Bride of Christ, is not defiled: such a thing is impossible. She remains beautiful, though blackened.

This paradox is the consequence of the Incarnation, and the way the Incarnation is continued in the Church as the Mystical Body of Christ. Something with a physical, personal, human manifestation in the world is susceptible to attack, wounding, and disgrace. You can’t have an incarnational theology without this consequence.

The Mystical Body is not a pure, spiritual thing which can only be seen with the eyes of Faith. It has a real, human, historical, manifestation. This manifestation can make it as vulnerable to profanation as the manifestation of the Body of Christ in the Blessed Sacrament. But while those who profane the Blessed Sacrament do something serious, because Christ is truly present there, they do not harm Christ. At the Last Judgement, when wicked Catholics, including priests, bishops, and popes, are tossed into Hell, the Church, as the Bride of Christ, will be presented to her Lord as a spotless virgin (2 Corinthians 11:2).

The relationship between Christ’s Divine and Human natures is, notoriously, not easy to explain: it is a mystery. That is, we can understand a number of things about it, things we must say and things we must deny about it, but we cannot fully grasp its internal logic. The same is true of the relationship between the human and divine aspects of the Church. I must leave it as something of a paradox. But it is paradox we must believe.

What we believe about the Church has the consequence that we are right to be angry, as well as bitterly grieved, about the clerical abuse revelations. This anger is not simply a justified emotional reaction, it is a duty. Anger is a desire for justice, and we must do what we can to secure justice in this case. This may well mean being less polite than we were wont to be, less inclined to overlook things, less generous with our money and volunteering: in a careful, systematic, persistent, and thought-through way.

What is not right would be to take the occasion to doubt the Church’s divine institution. The good works of the Church’s members, it is true, might be a consideration in her favour, and evil works obviously count the other way. However, the Church’s divine nature is manifested above all in the liturgy, the sacraments, and the perennial teaching which is guided by the Holy Spirit. My Catholic readers know what I mean when I say that as Catholics we know this deep down. We have experienced the consolation of the liturgy. We have experienced Christ’s forgiveness in confession. We know that the Real Presence is not make-believe: it is a supernatural fact that impinges insistently on the material world, in our lives, and in the lives of others. We cannot let the defilement of the Mystical Body lead us to doubt the purity of the Mystical Body, odd as that might seem. The Satanist who defiles the Blessed Sacrament does not make it less holy. His actions are, in fact, a testimony to that holiness, which he recognises and hates.

Satanists hate holy things because they have turned away from God and are enraged by the concrete possibility of goodness which they have rejected. They wish to tear it down to their own level of filthiness. It is said that paedophiles feel similarly about the innocence of children. Today’s focus is on the bishop-enablers. What were they thinking? Certainly they were not motivated by reverence and love for what is holy and for the innocent. The crushing worldliness of the episcopal attitude, the managerialism, is striking, but it does not explain actions which were often irrational and self-defeating from a worldly point of view. Those who see something demonic here are correct. What we see is a brutal carelessness, of brushing things aside, which reflects a rejection of the categories of holiness and innocence. They may have thought they believed the Faith, some of them, but at some level they did not. Not just in moments of high emotion, not just under intense temptation, but calmly, deliberately, day after day, year after year, in case after case, they rejected celibacy, they rejected the holiness of the sacraments, and they crushed innocence in the mortar.