This is an article that Hilary White wrote for The Remnant. It points out the need for good priests and religious to have a trade and the responsibility of the laity to provide for these good men and women who might get forced out of their primary vocation of serving God and His Church. It is well worth the read. __ Scoop

Things to Do in an Emergency: “What’s Your Trade?” 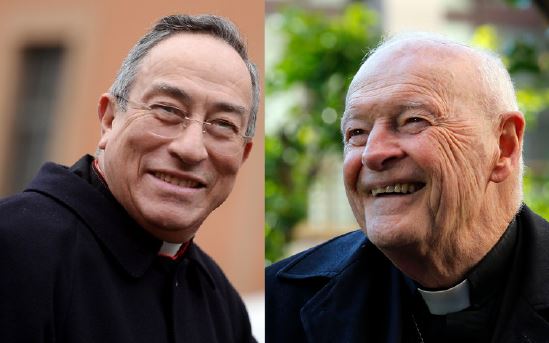 Well, it’s been quite a couple of news weeks for the Catholic Church, hey? McCarrick, Pineda/Maradiaga, Fr. James Larkin getting the boot in Dublin for upholding Catholic teaching on abortion… I know some people are, to put it bluntly, freaking out. The anger of the laity over the McCarrick situation is boiling over into the Twitter feed of the people we still call “the good bishops”. Bishop Thomas Tobin of Providence RI, – nicknamed the “Good Tobin” in contrast to the “Bad Tobin” and FrancisCardinal, Joseph Tobin of Newark – got quite an earful when he tweeted the other day, “Despite the egregious offenses of a few, and despite the faults and sins we all have, I’m very proud of my brother bishops and I admire and applaud the great work they do everyday for Christ and His Church.”

The replies haven’t topped out yet, at 121, nearly all of them expressing outrage at this cavalier attitude toward the revelation that Cardinal McCarrick has been proven to be a life-long homosexual rapist and sexual predator, grooming and trapping young men and children into unwanted sexual contact; and that nearly the entire episcopate of the United States either colluded directly or kept quiet about it. It’s clear that even the “good bishops” have simply no idea how close they are to being bodily chucked out of their own churches by furious mobs.

As I wrote elsewhere, since 2002, most Catholics know perfectly well, despite the lame whitewashing attempt, that “the US bishops gave themselves a pass” on clerical sex abuse with the Dallas Charter “a thing that brazenly shifted blame.” And it seems that though they’re still doing this, quite a few lay Catholics just aren’t having it.

We are seeing the final slide, the expected and inevitable result of the last 100 years. The Church was infiltrated, we know this, in the 19th century by some pretty dark forces, and they have finally come into the ascendancy and are showing themselves quite clearly for what they are. The McCarrick news – and all the stuff swirling around it like the latest about Bishop Pineda and his connection to Pope Francis through Cardinal Maradiaga – has not come in contrast to this but as an intrinsic part of it. The scandal of McCarrick is simply a toxic emission, a venting of the gasses that build up naturally around any rotting thing.

Rod Dreher[1] is doing excellent work compiling testimony from priests and others saying out loud at last what many of us had known for many years about McCarrick and his gang. It has shown the world what Traditionalists have known, that it is emphatically NOT the result of one “bad apple” or even only a “few” as the hapless “conservative” Bishop Tobin tried to claim on Twitter. This is the result of a mass-collusion. As our friend Steve Skojec put it the other day, “We’ve got to stop pretending it’s just the progressive element in the Church. The ‘conservatives’ are complicit, too.” In short, as it was during his days of glory, globe trotting on the dime of the State Department, hosting presidents for dinner and inviting John Paul II and Mother Theresa to tea, so it is now: McCarrick is the face of the New Paradigm. Whether he now has to go live in obscurity in some beach house in the Caymans, it will remain true: McCarrick is the “New Church.”

A point that Dreher’s informants have brought up needs to be made emphatic: the homosexualist cabal that is currently reported to be dominant in the Catholic hierarchy (and don’t imagine this is confined to the United States or even to the English speaking world) have a well documented methodology of mutual protection-and-threat that keeps the whole apparatus afloat. In briefest and simplest possible terms, immoral or even illegal sexual activity is preferred because it leaves a man open to blackmail, to control through fear of exposure[2]. When that blackmailing culture becomes ascendant, it will always reject the morally upright as too dangerous, too difficult to control. This is why faithful seminarians are rejected and why faithful priests are harassed.

When predatory gay priests run seminaries, they select on a bias for gay candidates… Gay seminarians who intend to be celibate, Sipe said, face tremendous pressure to have sex. If they slip up even once, their failure will be noted, and shared… And they will be made to understand that their lapse is remembered. Later, as a priest, predators within the priesthood have that knowledge to hold over the heads of other gay priests, to keep them silent if they ever have the desire to blow whistles.

When I was covering the scandal in the early 2000s, I spoke to several, unconnected heterosexual men — priests, former priests, seminarians — who said that gay seminary rectors or diocesan officials encouraged them to take female sexual partners, so that they too would be complicit in sexual secret-keeping, and therefore no longer [be] a potential danger. Nothing in a system like that is a greater threat to the corrupt than men who are not corrupt.

22 thoughts on “Things to Do in an Emergency: “What’s Your Trade?” | The Remnant Newspaper”