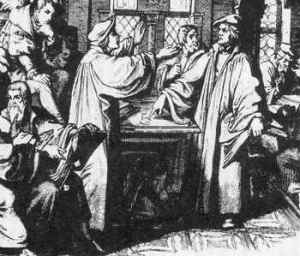 Phillip mentioned yesterday that Lutherans have a very clear doctrine of the Eucharist, which is certainly true, and that the controversy between Luther and Zwingli highlighted the differences. That too is true. I didn’t want to go into it on his post, it is a bit far off topic. It is interesting, though, and last night I found a concise summary of the differences by Trevin Wax. It also highlights how it differed from Luther’s contemporary Catholic experience.

In the medieval period before the Reformation, the mass formed the centerpiece of Christian worship and devotion. Three centuries before Luther began teaching in Wittenberg, the fourth Lateran council of 1215 established the doctrine of transubstantiation, which holds that upon the priest’s consecration of the bread and wine, the accidents (according to the senses) remain the same, but the substance (the internal “essence”) is miraculously transformed into the physical body and blood of Christ.

The implications of this doctrine were widespread. Laypeople began to adore the bread and wine from afar or superstitiously carry pieces of bread back home to plant in the garden for good crops or to give to an ailing animal for good health. To avoid an accidental spilling of the wine, the priests began giving only the bread to parishioners, keeping the cup for themselves. By the 1500’s, even the bread was withheld in most churches.

The mass had turned into a show instead of a sacrament. Some parishioners feverishly hurried from church to church to obtain the blessing of seeing more than one host in a given day.

Luther objected to the extreme practices brought by medieval superstition, but he continued to regard the “images, bells, Eucharistic vestments, church ornaments, altar lights and the like” as “indifferent.”

Two things in particular bothered Luther about the Roman Catholic view of the Lord’s Supper. First, he disagreed sharply with the practice of withholding the cup from the laity. So strongly did Luther believe in the laity’s participation in the mass that he condemned the Roman Catholic practice as one way that “Babylon” holds the church “captive.” (It should be noted however that Luther did not believe that withholding the cup necessarily invalidated the sacrament or that the Christians who were denied the cup during the previous centuries had not received sacramental benefits.)

Secondly, Luther believed that the Roman Catholic understanding of the sacrament as a “good work and a sacrifice” was the “most wicked abuse of all.” Luther argued forcefully that the mass must be seen as a testament – something to receive, not a good work to perform. The only sacrifice at the Lord’s Table is the sacrifice of ourselves. The idea that a priest could sacrifice the body and blood of the Lord was especially appalling to Luther and he considered this belief the most abominable of Roman errors.  […]

Another area in which Luther remained close to Roman doctrine is in the doctrine of the “real presence.” Up until 1519, it appears Luther agreed with the official doctrine of transubstantiation. In 1520, he criticized the idea quite forcefully, painting it as needless speculation based on Aristotelian thought.

A popular misconception among Reformation students is that Luther affirmed and promoted “consubstantiation,” but neither Luther nor the Lutheran church ever accepted that term. Luther simply refused to speculate on how Christ is present and instead settled for affirming that he is there. The presence of Christ in the Supper is miraculous and thus defies explanation.

Roman Catholic theologians strongly emphasized the moment of consecration, when the priest would lift the bread and say “Hoc est corpus meum.” At that moment, bells would be rung and all eyes would be on the elevated host, which had magically been transformed into Christ’s body.

Luther similarly emphasized the words of institution, but only because Christ’s command leads to the change, not because the priest has made a special utterance. In this and other practices, Luther was content to alter the understanding behind Roman Catholic practice without feeling the need to actually change the tradition itself.

Zwingli did not see the need for a “sacramental union” in the Lord’s Supper because of his modified understanding of sacraments.

According to Zwingli, the sacraments serve as a public testimony of a previous grace. Therefore, the sacrament is “a sign of a sacred thing, i.e. of a grace that has been given.” For Zwingli, the idea that the sacraments carry any salvific efficacy in themselves is a return to Judaism’s ceremonial washings that lead to the purchase of salvation.

Whereas Luther sought to prune the bad branches off the tree of Roman Catholic sacramentalism, Zwingli believed the problem to be rooted at least partly in sacramentalism itself. […]

What Zwingli could not accept was a “real presence” that claimed Christ was present in his physical body with no visible bodily boundaries.

“I have no use for that notion of a real and true body that does not exist physically, definitely and distinctly in some place, and that sort of nonsense got up by word triflers.”

Zwingli’s theology of the Lord’s Supper should not be viewed as an innovation without precedent in church history. Zwingli claimed that his doubts about transubstantiation were shared by many of his day, leading him to claim that priests did not ever believe such a thing, even though “most all have taught this or at least pretended to believe it.”

Had Zwingli’s modified doctrine of the “real presence” been an innovation, it would probably not have been so eagerly accepted by his parishioners. The symbolic view spread rapidly because Zwingli had given voice and legitimacy to an opinion that was already widespread.

In Zurich, the mass was abolished in 1525. The Lord’s Supper was celebrated with a new liturgy that replaced the altar with a table and tablecloth.

The striking feature of the Zwinglian observance of the sacrament was its simplicity. Because the bread and wine were not physically transformed into Christ’s body and blood, there was no need for spurious ceremonies and pompous rituals. The occasion was marked by simplicity and reverence, with an emphasis on its nature as a memorial.

Zwingli’s denial of the “real presence” did not result in the neglecting of the sacrament that would characterize many of his followers in centuries to come. He saw seven virtues in the Lord’s Supper that proved its importance for the Christian life.

Do read the articles linked above. While what he says on Lutheran doctrine is in accordance with what I know and believe, and what I know of how it was derived, and I am sort of assuming that as an Evangelical he knows a fair amount about Zwingli, I don’t know enough to comment intelligently about it. My original church had a fair amount of Reformed in it, but it was long ago, and I’ve long since come to believe in The Real Presence myself, actually before I became a Lutheran. It is just more consonant with the Lord’s words and the disciples’ reaction to them.

15 thoughts on “Intermission: Luther v Zwingli on the Eucharist”