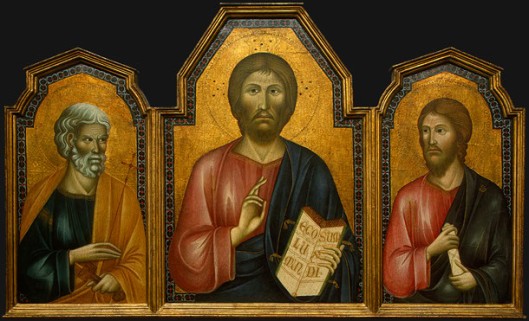 Yesterday I dealt with the common Evangelical misreading of what the Bible has to say about worship and idols. Today’s target is the misreading of the NT passages about the family of Our Lord. Truly there are no new errors under the sun. There are, however, repetitions of errors by those unversed in history.

In the fourth century a man called Heldvius wrote a book arguing that Mary was not a perpetual virgin and that the brothers and sisters of Jesus recorded in the Gospels were uterine siblings. This ran counter to what Christians had always believed, and St Jerome responded with a book called  The Perpetual Virginity of Blessed Mary  in which he suggested that they were either cousins on Mary’s side, or children of a previous marriage of St Joseph.

The word used by the Evangelist is adelfos/adelphos. For monoglots who insist that the word brother must mean uterine brother, here is Strong’s defintion:

This, of course, presents no problem for the Infallibilists among us, who proclaim on the basis of their own unaided reading of the KJV that that it has to mean uterine brother. Such a reading defies both the dictionary and most of Christian tradition. It also runs counter to usage elsewhere in the Bible and is, were another one needed, it is an example of the way in which such people tend to make it up as they go along (you won’t find Anglicans or Lutherans indulging in this).

For example, in Genesis 13:8 and 14:16, the word adelphos was used to describe the relationship between Abraham and Lot; however, these two men did not share a brother relationship, but one of uncle and nephew; so does it mean Anbraham and Lot were brothers? Of course not.  Similarly, Jacob is called the “brother” of his uncle Laban (Gen. 29:15). Kish and Eleazar were the sons of Mahli. Kish had sons of his own, but Eleazar had no sons, only daughters, who married their “brethren,” the sons of Kish. These “brethren” were really their cousins (1 Chr. 23:21–22). So, if we are going to insist on a single meaning for ‘adelfos’ then we are going to find ourselves with a pile of egg on our face.

There is an excellent post on this and links to other other explorations of the problem. You will note that like all true apologists, this one deals with care and in detail with the evidence; not once does he state that it must be as he says because the word in English is ‘brothers’ – as though it has only one meaning in English.  When I refer to fellow Christians as brothers in Christ, I am not implying that my late father and mother had lots more children.  When my Trades Union colleague refers to his ‘brothers’ in the Union, he is not implying that he is related to them by birth.

When the Holy Family go into exile in Egypt, there are three of them; when they go to present the child in the Temple, there are three of them; when they go to take the young Jesus to the Temple when he is 12, there are three of them. At the crucifixion Jesus does not commend His mother to Her other sons, he commends her to St John, His cousin. Of course, it could be that all those sons were hiding, or, as Bosco maintains, that they were not Christians, or that they just happened to have the same names as the sons of Mary and Clopas. Of course, it could also be that the Church and most Christians for most of history have it right. The Lutherans are wrong, the Catholics and the Orthodox are wrong, the Anglicans are wrong, but a few monoglot Englishmen with access to a dictionary know better than the people who spoke kione Greek. We see, once more, the effects of Original Sin at work. Mankind fell because it sought to be as wise as God. Some of those ‘born again’ claim such wisdom, and neglect, alas, to take advantage of the accumulated wisdom of Christians down the ages.

53 thoughts on “Misreading the Bible: Jesus’ brothers and sisters”