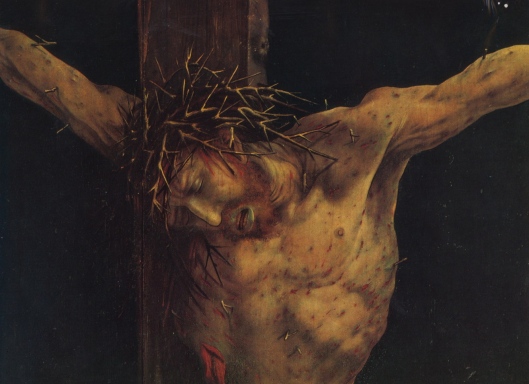 God is hidden from our eyes, mankind cannot look upon him and live. He appears in a cloud, in a burning bush, in the quiet after the storm, and he speaks through the prophets and through His Law. This is the God we see in the Old Testament. This is God as King, as Judge, too splendid for human eye to see – only to be accessed through other mediums – never directly. God made man. We are the creature, He is the Creator: his wisdom so far above our imaginings that we cannot quite grasp it. All of this is the language we might expect from a people who lived with the splendours of the Pharoahs or the rulers of Babylon: God is like those rulers, but so much more potent and so much more mysterious. He is the God who drowns Pharoah’s men in the tide, who assails the enemies of the House of Israel, and who will avange all slights and wrongs. This is like the most powerful monarch ever known to the power of a million. God is hidden from our eyes, immortal, invisible, the only wise.

All of that granted, we can understand better why so many Jews would not receive Christ. Yes, by all means, when He was doing great miracles, they could believe he was the Prophet long-promised – even the Messiah who would sweep the Roman filth from the land and restore Zion. But when he hung there on the Cross, scourged and battered beyond recognition? Were they to believe that the God that was hidden was now hanging there for all to jeer at? Were they to believe that God had come in human form as a tiny baby, nursing at his mother’s breasts? What was this? How could it be so? It was little wonder that even some of those who confessed Christ as saviour sought to find a way to align that with the God who was hidden. One of the earliest heresies – docetism – posited that God’s Spirit had inhabited the body of Jesus, but had departed at the crucifixion – a belief shared today by many Muslims, picked up, in all probability, by Mohammed from Christian heretics. It was certainly a way of reconciling the grandeur of the hidden God with the reality of Christ’s suffering.

But it is a heresy, because we cannot be redeemed by a fellow creature, no matter how holy. Only the assuption of our human nature on the part of God could redeem it. The whole of early Christology was a search for how this necessary condition could have happened. When the smoke of battle cleared, the Church accepted that the divine and human nature existed in the one body of Christ, without intermingling. Christ was fully human and fully God. That is why it mattered that Mary was the ‘Mother of God’ – Christ is God, Mary is his mother, she is therefore the mother of God. That is why it was important to the early Christians to be able to represent Christ pictorally and in other ways – the fact that God was made flesh meant we could see Him – he was no longer hidden from our eyes. Those who mistakenly suppose God fobids us to make an image of Jesus and his mother, inadvertently fall into the trap of supposing God does not mean us to worship him in images. Images of God in the flesh are a living testimony to the truth that God is man and God is divine. The divinity we see as through a glass darkly – but the flesh we see, and through the flesh our flesh is redeemed and we are made one with him.