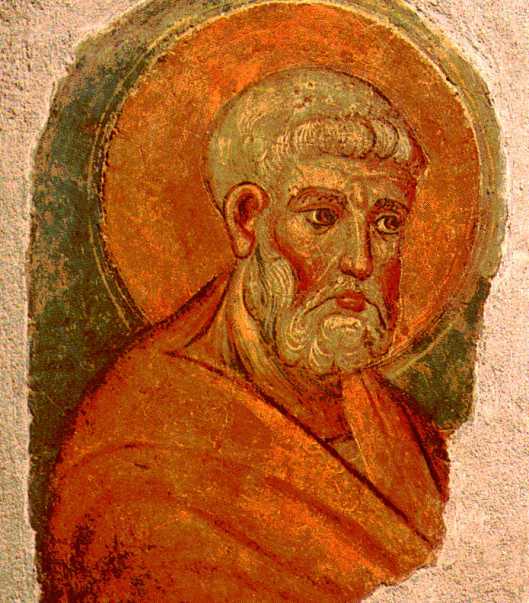 The claims of the Church with regard to the office of the Pope go back to the very words of Jesus Christ himself. In Matthew 16:13–20 we read the famous confession of faith by Peter at Caesarea Philippi. In response to his statement affirming him as the “Son of the Living God,” Jesus tells Peter: “I tell you, you are Peter [Greek: petros] and on this rock [Greek: petra]. I will build my church …” Here we see Jesus change the name of Simon to ‘Rock’, before saying that He would build his Church on that Rock.

Against this Protestants have a number of arguments, one of which is ably summed up here. It is the argument over the Greek words ‘petra’ and ‘petros’. In Greek, nouns have gender.  It is similar to the English words actor and actress.  The first is masculine and the second is feminine.  Likewise, the Greek word “petros” is masculine; “petra” is feminine.  Peter, the man, is appropriately referred to as Petros.  But Jesus said that the rock he would build his church on was not the masculine “petros” but the feminine “petra.”

There is a perfectly natural explanation for the πέτρος (petros) / πέτρα (petra) construction: πέτρα (petra) is a feminine word. Jesus could hardly have used a feminine noun as the name of Simon Peter—“You are Petrina”?
So, grammatically, we have a problem. On the one hand, one cannot use πέτρος (petros) to describe a suitable foundation for a building project—for that, again as Matthew 7:24 indicates, one must speak of πέτρα (petra). Yet, on the other hand, Jesus can hardly name Peter, πέτρα (petra)—because the word is feminine! Jesus can’t give Peter a feminine name!

In fact, if Jesus wanted to apply the terminology of the πέτρα (petra), i.e., that which the Church is built upon, to Peter, we would expect to find very kind of shift in language we have in Matthew 16:18. The reason for the different Greek form is simply that Peter, as a man, needs a masculine name, and so the form Petros has been coined. But the flow of the sentence makes it clear that the wordplay is intended to identify Peter as the rock.  It is hard to see how any plain reading of the text can make Jesus the object of the sentence.

Nor will it do, as the piece I cited above, does to reject the argument that the Aramaic, Kefas/Caphas definitely refers to Peter.  Throughtout the NT the form Kephas is mentioned, so it is clear that there is a significance in the name change. (John 1:42; 1 Cor 1:12; 3:22; 9:5; 15:5; Gal 1:18; 2:9, 11, 14). Simon’s name was changed to rock for a reason. If Protestantism requires one plays games with words to deny that, then its house is not built on rock.  The deliberate use of the “pevtra-Pevtro” pun in 16:18, the only verse in the entire NT that contains both words, seems to indicate the Jesus specifically singled out the apostle Simon Peter as the “rock” in question. Peter is not given this position because he is inherently worthy; instead, he receives this title because he confessed his faith in the Messiah.

But, even if you grant this argument (and you may not) is that the same as saying that the Roman claims are correct? To show that a number of things would need to be shown: that what Christ conferred on Peter was something that could be passed on only to the Bishop of Rome; and that the powers were as Rome has claimed. It is to those topics we must turn.

16 thoughts on “The Petrine claims”