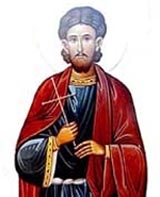 Theodore of Mopsuestia (392-428), was one of the leading lights of the Antiochene School, and his biblical exegesis and theological reflections became the standard of orthodoxy of the churches in Persia in succeeding centuries, and he remains an important figure for the Church of the East. His teacher, Diodore, bishop of Tarsus (378-394), had taught that there had to be a clear division or distinction between “flesh” on the one hand and “Logos” on the other. Theodore taught that: “When we try to distinguish the natures, we say that the person of the man is complete and that that of the Godhead is complete.”

Theodore’s concept of the divine-human relationship in Christ is also connected to his soteriology, or doctrine of salvation. He drew an analogy between God’s relationship to Christ, and God’s relationship with those He redeemed. Just as God’s Spirit guides the soul of a believer now, and will perfectly govern it in the future, so the indwelling Logos guided and governed Christ. In Theodore’s words, “Therefore, just as we, if we come at last to the future state, shall be perfectly governed by the Spirit in body and soul, but now possess a kind of partial first fruits of that condition…so also the Lord ” By indwelling Jesus, God increasingly governed Him through the Logos, just as He increasingly governs the redeemed. Christ was a human being in whom the Spirit of God dwelt in a very special manner.

It has become fashionable recently to argue that Theodore was not the heretic that he was called by the early Church, and to point out that some of his thinking can be traced in the ‘Tome of Leo’ at Chalcedon. Truly there is nothing new under the sun. It was precisely for that reason that the Fathers of the Copts rejected Chalcedon – they saw in it the hand of Theodore. That was wrong then for the reason it is wrong now. There is not the slightest evidence Leo the Great had read any Theodore, and his ‘Tome’ certainly does not treat Jesus as a man in whom the Holy Spirit indwelt in a special manner, neither does it treat Jesus’ two natures as married to each other in the way a husband and wife are.

It is important to realise that whilst Theodore’s final expressions of his views were heretical, they are based on a substrata of ideas which are not. If one wanted to be ecumenical, one might say that Theodore’s ideas were an evolutionary dead end to a set of ideas which through a process of natural selection, survived via Leo and Chalcedon. Theodore certainly offered answers to the question of what it meant to say that the Word was made flesh, but it was one which contained too many elements of adoptionism and Sabellianism to be judged satisfactory. It left open the door to the idea that Christ was a human being adopted in a special way by God. It said nothing about pre-existence, and this is where it failed to provide a fully satisfactory answer.

For the missing elements, we need to turn to Alexandria, where we shall have occasion to note, again, error mixed with truth.

6 thoughts on “The School of Antioch”