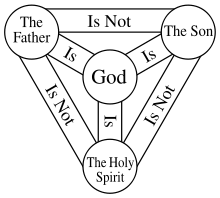 Scripture does not interpret itself; we interpret it. There are two main methods of interpretation: one’s own reading; or the reading of a tradition within Christianity. We can see from John’s Epistles that there were those in his own Community who would not accept his word on who Jesus was. We can also see Paul, Jude and Peter all warning against false teachers. From the beginning there have been these two interpretations – what an individual claimed, and what the Church as a community claimed. One of the first areas of dispute was the one we have begun to consider – which is the question of the relationship between Jesus and the one He called ‘the Father’.

It is easy for the unwary to fall into the trap Bosco has – that is insisting that Jesus is the Father, and that the words can be used interchangeably – as though ‘Father’ and ‘Son’ are the same thing. It was partly in response to the the false teachings which he detected in his own Community that St John set down his Gospel as he did, paying attention to what we now call Christology, in a way the other Evangelists did not. Hence we get St John writing such verses as:

I and My Father are one.”

If one reads this a meaning that Jesus is the Father and the two are interchangeable, then precisely what does John 14:28 mean:

You have heard Me say to you, ‘I am going away and coming back to you.’ If you loved Me, you would rejoice because I said, ‘I am going to the Father,’ for My Father is greater than I.

If Jesus and the Father are the same person then here Jesus is saying he is ‘greater than himself’ – which would be plain odd. We can turn to Hebrews 2:9 for help, as it tells us that Jesus ‘was made a little lower than the angels, for the suffering of death’. As Paul told the Philippians:

Christ Jesus, who, being in the form of God, did not consider it robbery to be equal with God, but made Himself of no reputation, taking the form of a bondservant, and coming in the likeness of men. And being found in appearance as a man, He humbled Himself and became obedient to the point of death, even the death of the cross.

But the problem is that read unaided, this still does not provide proof that Jesus is not a creation of the Father, and might, in the wrong hands lead the believer even further astray. Indeed there were some in the early church who read this as meaning that Jesus only appeared to be a man –  which led to a heresy known as Docetism. But they were as wrong as Bosco is in insisting Jesus ‘is the Father’.  It was in trying to understand these statements that the early Church developed the doctrine of the Trinity.

Clearly Jesus is saying He is God, and as St John tells us, in words which condemned the docetists:

But Jesus is also made man, so in that sense He is lower than God; He is also not the Father, although the Father is God. Now, had Bosco taken the trouble to read, instead of mock, St Cyril of Alexandria, then he would not only not make claims which Jesus never made (He never says ‘I am the Father’), he would begin to know who Jesus is.

St Cyril explained the relationship by what he called the ‘hypostatic union’, which Bosco feels he can mock as having nothing to do with salvation. Unlike his own ruminations, the idea of the hypostasis is based upon what is in the Bible, not what someone wants to be in there. To quote a summary so good that I cannot see how it could better put:

But we should not be surprised at such disputes, for, as we shall see in the next post, the Apostles themselves were familiar with them. Yes, there were men so proud that they would deny the words of the beloved disciple himself. They were, of course, they claimed, inspired by a new spirit. There are many such in this world, of course, but not all of God.