As we can see from this brief survey of St. Cyril’s theology, the Incarnation was at the heart of all his thinking. The Incarnate Word unites our nature with that of God as a salvific act; the power of the one heals and transforms the marred nature of the other. It was essential to this scheme that the Word suffered, albeit ‘impassibly’. There is only one personal reality in the Incarnate Lord, and that subject is the divine Word who has made a human nature His own; the Word has not simply adopted a body, He has taken on a whole human life; He is ‘the Word enfleshed.’ [1] The whole point of the Incarnation is that through it, our fallen nature is raised to new heights. Christ’s flesh is, indeed, ‘life-giving’. If His flesh were not divine flesh it could not heal us, but if it were not also flesh, we could not receive its healing at the Eucharistic Feast. What Christ deifies in his own flesh, he deifies through Grace in mankind.

This was the position St. Cyril enunciated against the heresies from Constantinople and Antioch, and he had found it years before in his commentary on St. John 1:11-13, where he realised that the Incarnation had three aims: to condemn sin in the flesh; to overcome death by his death; and to make us children of God by which we receive a regeneration in the Spirit. [ 2] As Professor Keating so aptly remarks: ‘There is something of grandeur, and even beauty, in Cyril’s conception of our share in the life of the triune God.’ [3]

It has long been held in parts of the Protestant tradition that patristic exegesis is, in fact, eisegesis – that is a misreading of the Bible. Despite the fact that the Fathers helped establish what was, and was not, the canon of Holy Scripture, we are asked to believe that their inspiration failed them when they came to examine the same texts. This is not the Orthodox understanding, for it separates text, meaning and action. St. Cyril was not just a theologian; he was a bishop and pastor, a great teacher who held responsibility before God for his flock. He wrote not for the academic journal, but for the salvation of souls. Everything he confessed he derived from Scripture and from the Alexandrian Holy Tradition of which it is such an important part, and in setting his own mark upon that tradition he is, indeed, ‘the Seal of the Fathers.’

St Cyril’s part in the death of the Pagan philosopher, Hypatia, which I have dealt with elsewhere on this blog has tended to overshadow his reputation in a world which prizes a feminist Whig theory of history over theology, but it is worth recovering his theology, and going beyond the controversies which have defined him in the history books. Like his own hero, Athanasius, Cyril is strong meat to a generation whose faith in relativism fails only when it comes to the foundation of its own faith, but the traditional Coptic reading seems to me the most persuasive. Cyril was a man steeped in Scripture (you can hardly read three lines of his writing without coming across a Biblical reference) and in the Fathers. He saw himself as the inheritor of the great Alexandrian tradition of theology, and his job was to defend what he had inherited. He had a keen ear for novelty and a keen nose for unorthodoxy, and he brought the full weight of his intellect to bear on both when he thought that there were wolves in the sheepfold.

St Cyril’s patriarchate was the high-water mark of the See of St Mark at Alexandria. Like his uncle Theophilius, whom he had succeeded, Cyril was a skilled ecclesiastical politician. Both men had been careful to build and maintain an alliance with Rome, which appreciated both the intellectual fire-power of Alexandria, and its place as a counter-balance to the ambitions of the Patriarchate of Constantinople. Theophilius had been able to depose the golden-mouthed John Chrysostom after the Synod of the Oak, and Cyril was able to depose the heretical Nestorius. In both cases, their enemies alleged that this was the result of Alexandrian bribery, but whilst, as was always the case in that era, ‘gifts’ were given, in Cyril’s case at least, it was the weight of his argumentation which counted most. But when his successor, Disocoros, tried to repeat the success of his predecessors at the second Council of Ephesus in 449, the manner of his initial success led to a Council being convened at Chalcedon in 451, where he was reprimanded for his high-handedness. Lacking Cyril’s intellectual weight, he was out-marshalled, and, failing to get the Bishop of Rome on side, was deposed, with his enemies alleging he taught heresy. This led, across the next 150 years to what became a permanent schism, which opened the way to the triumph of Islam. If Alexandria lost its place in the Christian Pentarchy, then Jerusalem, Antioch and, fianlly, Constantinople, would fare no better. After 1453 Rome was the only one of the ancient Sees of the early Church not to have been swamped by the Muslim tide; a position it retains to this day.

But let us not finish this short series on a pessimistic note. As I write, Pope Tawadoros II and Pope Francis have issued a joint statement on Coptic/Catholic relations

We, Francis, Bishop of Rome and Pope of the Catholic Church, and Tawadros II, Pope of Alexandria and Patriarch of the See of Saint Mark, give thanks to God in the Holy Spirit for granting us the joyful opportunity to meet once more, to exchange a fraternal embrace and to join again in common prayer. We glorify the Almighty for the bonds of fraternity and friendship existing between the See of Saint Peter and the See of Saint Mark. The privilege of being together here in Egypt is a sign that the solidity of our relationship is increasing year by year, and that we are growing in closeness, faith and love of Christ our Lord. We give thanks to God for this beloved Egypt, the “homeland that lives inside us,” as His Holiness Pope Shenouda III used to say, the “people blessed by God” (cf. Is 19:25) with its ancient Pharaonic civilization, the Greek and Roman heritage, the Coptic tradition and the Islamic presence. Egypt is the place where the Holy Family found refuge, a land of martyrs and saints.

2. Our deep bond of friendship and fraternity has its origin in the full communion that existed between our Churches in the first centuries and was expressed in many different ways through the early Ecumenical Councils, dating back to the Council of Nicaea in 325 and the contribution of the courageous Church Father Saint Athanasius, who earned the title “Protector of the Faith”. Our communion was expressed through prayer and similar liturgical practices, the veneration of the same martyrs and saints, and in the development and spread of monasticism, following the example of the great Saint Anthony, known as the Father of all monks. This common experience of communion before the time of separation has a special significance in our efforts to restore full communion today. Most of the relations which existed in the early centuries between the Catholic Church and the Coptic Orthodox Church have continued to the present day in spite of divisions, and have recently been revitalized. They challenge us to intensify our common efforts to persevere in the search for visible unity in diversity, under the guidance of the Holy Spirit.

St Mark was, we are told, the interpreter of St Peter, and the See of St Mark has a special place in the heart of the See of St Peter. What a joy, then, to see their successors speak of the goal of unity. Let us pray that Cyril’s successor may one day write, as the great Saint did upon the reconciliation with Antioch in A.D. 433 – ‘Let the heavens rejoice’ – Amen. 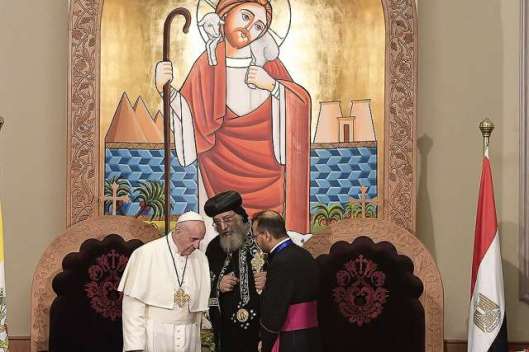 3 thoughts on “St Cyril’s contribution and a new hope”