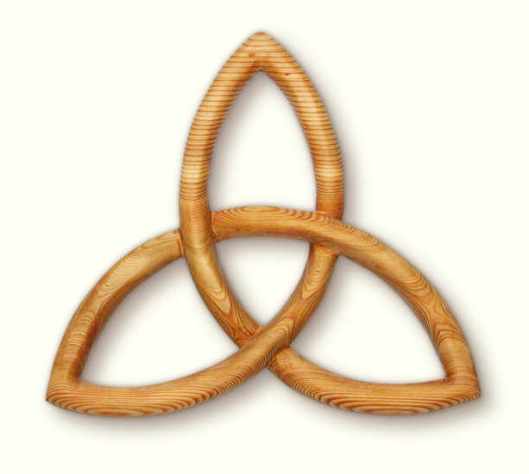 I suggested yesterday that it is clear that Christians have developed their understanding of Scripture from the earliest times; that tradition, oral and written to which Paul refers in his second letter to the Thessalonians, has been preserved and studied. One of the distinctive features of Christianity is that it sees God in Three Persons, the Blessed Trinity. We like to say that it is inherent in Scripture, and indeed Father, Son and Holy Ghost are all found there; but the relation between the Three has not always been clear, and if the early history of Christianity shows us anything, it is that left to themselves, even learned men can be led, and lead others, astray. In this short series I want to examine the developing understanding of ‘Father, Son and Holy Ghost’ in the early Church.

Strictly speaking heresy is only rightly so called when it appears in opposition to orthodoxy, and it is often the case in the early Church that beliefs which were, when enunciated debatable, later became classified as heretical, and it is well to say upfront that in the long debate over this matter, heresy has played a useful part in forcing the Church to be clearer about what is and is not orthodox belief; another reason, of course, why absent authority, chaos is not far away. Most Trinitarians accept a definition arrived at by the Church and guaranteed by it, even if they cannot accept the Church which gave that guarantee.

One common early reading, which is still present in some Pentecostal churches is called ‘Modalism’.  Modalism is the belief that God, rather than being three persons, is one person who reveals himself in three “modes,” much as an actor might play three roles in a movie. It is also called Sabellianism or monarchianism. Modalism is associated with two notable early church figures, Praxeas and Sabellius, both of whom gained a large following in the church in the late 2nd (Praxeas) and early 3rd centuries (Sabellius). The size of their following and an explanation for it is given by Tertullian in A.D. 200:

The simple, indeed, (I will not call them unwise and unlearned), who always constitute the majority of believers, are startled at the dispensation [of the Trinity], on the ground that their very rule of faith withdraws them from the world’s plurality of gods to the one only true God.
They fail to understand that, although he is the one only God, He must yet be believed in with his own order. The numerical order and distribution of the Trinity they assume to be a division of the Unity, whereas the Unity which derives the Trinity out of its own self is so far from being destroyed, that it is actually supported by it.
They are constantly throwing out against us that we are preachers of two gods and three gods, while they take to themselves the preeminent credit of being worshippers of the one God, as if the Unity itself with irrational deductions did not produce heresy, and the Trinity rationally considered constitute the truth. (Against Praxeas 3)

There is not One Divine Person, there are Three. The earliest definition of Our Faith is to be found in St. Irenaeus:

The Church, though dispersed through our the whole world, even to the ends of the earth, has received from the apostles and their disciples this faith:

[She believes] in one God, the Father Almighty, Maker of heaven, and earth, and the sea, and all things that are in them.

And in one Christ Jesus, the Son of God, who became incarnate for our salvation

And in the Holy Spirit, who proclaimed through the prophets the dispensations of God, and the advents, and the birth from a virgin, and the passion, and the resurrection from the dead, and the ascension into heaven in the flesh of the beloved Christ Jesus, our Lord.

Tertullian shows us the problems the early Fathers had:

Before all things God was alone … He was alone because there was nothing external to him but himself. Yet even then was he not alone, for he had with him that which he possessed in himself—that is to say, his own Reason.

… Although God had not yet sent out his Word, he still had him within himself …

I may therefore without rashness establish that even then, before the creation of the universe, God was not alone, since he had within himself both Reason, and, inherent in Reason, his Word, which he made second to himself by agitating it within Himself.

It is easy to see from this how Arius could conclude: “there was a time when the Son did not exist.”

The early church answer was that there was a time when the Son was not separate from the Father, but there was never a time when he did not exist. Before He was separate from the Father, He was already the Logos inside of God. There was a term for this: homoousios (of the same substance). It was so important that it was inserted in the Nicene Creed twice.

The second part of this series will explain why this word was so important. But already we have, I think, established that left to themselves, there is no guarantee that theologians or ordinary Christians, will come to an orthodox understanding of who God is.

34 thoughts on “Misunderstanding the Trinity”