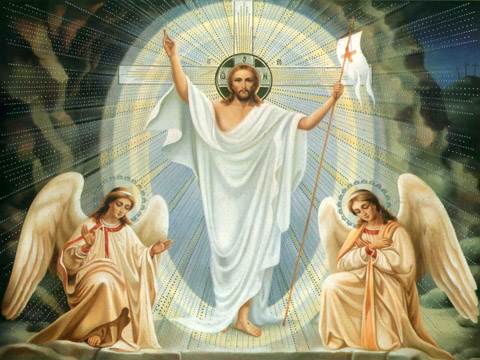 The Exsultet, with which we begin the Easter Vigil, ends with the words:

May this flame be found still burning
by the Morning Star:
the one Morning Star who never sets,
Christ your Son,
who, coming back from death’s domain,
has shed his peaceful light on humanity,
and lives and reigns for ever and ever.

Unbelievably, there are sad sacks such as Bosco here, who, being monoglot and poorly-educated, see the word ‘lucifer’ and imagine that here we are worshipping Lucifer – and if you find that as impossible to believe as I did, here’s a link.

The reference is, of course, to 2 Peter 1:19. The day has dawned, the Morning Star has risen in our hearts, because the Light which ligtheth the world has banished death, and our hearts rejoice, being freed from the burden of sin. Like St Peter and the Holy Women, we could not have discovered the joy of the Resurrection had we stayed imprisoned in our fears and selfishness. On this first Easter night, the angels moved the stone away, and so, too, does Christ move away the stone which imprisons us in the tomb of our sense of sin. We are not without hope. We who were lost are found, we who we hopeless are redeemed, not by anything we deserve, but by His love, freely offered for us on the Cross at Calvary. Hope is the gift of Christ to us.

On that first Maundy Thursday two of the Apostles betrayed the Lord. Judas was the one who brought the troops to arrest Jesus, but Peter, who had promised to support Him no matter what, betrayed him thrice before the cock crew. Those who mock and say how can such a man be the foundation of the Church of Jesus need more of a sense of self; when they look within do they see a sinless being? The Gospel story is all the more convincing for this detail. Who, making up a narrative, would include such a detail about the leader of the Apostles? But where Judas, in in his pride, despaired of forgiveness and hanged himself, Peter lived his shame and was forgiven and redeemed; in that, Peter is the model for us all.

Jesus knew that Peter would fail; he told him as much. But that did not mean that Jesus reproached Peter; he knew that Peter’s conscience would do that work for him. Peter spoke with confidence, a confidence which reminds us of what St Paul told the Corinthians: ‘Therefore let him who thinks he stands take heed lest he fall.’ Peter did not watch; he fell. We, often, do not watch, and we fall. If we have been told that we ‘are saved’, then when we fall, we either despair, like Judas, or, in this modern world, think it a sign that such assurance was wrong; either way we turn from the Lord. But if we read the story of Peter aright, we know that Jesus does not turn from us. He did not suffer on the Cross, He did not break the bonds of death in order that we should be lost. Unlike Satan, who comes to kill and destroy, and whose strongest weapon is our despair and pride, Jesus came that we should have life, and have it abundantly. The hope and the joy of the Resurrection are His strongest weapons, for they are the product of His love.

St Thomas needed to put his finger in the holes made by the nails before he believed, but as Jesus has told us, it is even more blessed to believe without seeing. So, my dear friends, brothers and sisters in Christ, may the joy of the Resurrection be with us all, ever more.

Christ is risen from the dead,
by death trampling down upon death,
and to those in the tombs He has granted life.

9 thoughts on “He is Risen Indeed!”