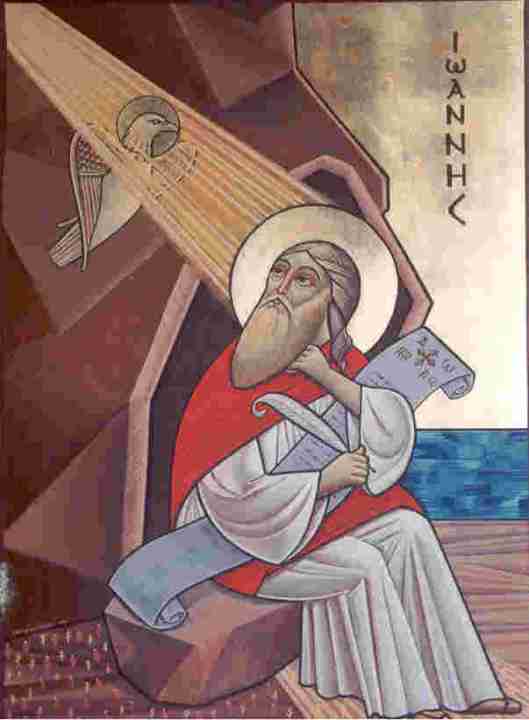 When I was a young man at University my tutors had a firm line on St John’s Gospel. They were agreed that it was a second century document; that it was a product of Hellenistic thinking; that it had in it Gnostic elements; and that whoever had written it, it could not have been the ‘Beloved disciple’ who stood at the foot of the cross. One of the pleasures of growing older has been to see nearly every element in this exploded.

The conclusion that it was second century came from the belief among scholars back then that its theology was far too complex for the early Church. The fragment of St John’s Gospel now at the John Rylands Library in Manchester, known as P52, is thought to date from around 120 AD. It was found in Egypt. No one believes it was written there, so it is a copy. We cannot know where it originated or how many copies there were in circulation at the same time. We do know it takes time for copies to be made and to circulate, and it is not unreasonable to suppose it might have taken a decade between the composition of the Gospel and its arrival in Egypt. Modern scholarship suggests, in other words, that c.100 A.D. is probably the latest date for its composition.

Bishop John Robinson was a controversial figure for the views he expressed in his book Honest to God, but for me, his best book remains Redating the New Testament which was published in 1976. His views, as ever, did not command universal support, but in terms of the dating of the Scriptures, there are strong arguments in his favour. For him there was one fact as of fundamental importance – the destruction of the Temple in Jerusalem in AD 70. A datable fact, and one which rocked the Jewish world on its foundations, it is never once mentioned in any of the NT books; this, Robinson pointed out, is exceedingly odd. It is like someone writing a history of modern Britain and not mentioning world war II; you would do that only if you were writing before that war had taken place.

By the 1950s the conventional consensus was something like this:

Much of this, Robinson pointed out, was based on theories of what theological developments it was supposed were relevant to what date; anything ‘advanced’ had to be late, and as John’s Gospel was, theologically speaking, very sophisticated, that meant it must be the latest. That rather presupposes the conclusion you want to reach, and seems an unreliable method.

The early church was very cautious about claims of texts to be apostolic, there needed to be a real tradition about the provenance of a Gospel, and John’s was accepted from the beginning. It is impossible to read the text without coming to the conclusion that the person is claiming to be the Beloved Disciple. Much paper and ink have been spent on the notion of a Johannine comunity, the existence of which (outside those pages) has never been shown to exist, and yet, on the basis of an academic construct, scholars have argued that the text is not by John but by others in his name. The evidence for this is the supposed existence of the ‘community’. The circular element in this argument is all to apparent, but if we read the text without the presuppositions scholars brought to it, then we have no need to assume other authorship.

Scholars have extrapolated from the tradition that John lived to a grand old age, and assumed that the Gospel must have been written towards the end of his life; for this there is no hard evidence. The end of the Gospel is clearly written by another hand after John’s death, but that is no reason to assume that the rest of it was also written in the late first century. The similarities between some of the ideas in the Dead Sea Scrolls and John’s Gospel kicks the props away from the old theory that it had to be late because of Hellenistic influence; there was much more interpenetration between Hebrew and Greek thought than scholars once recognised. As Robinson puts it: ‘The gospel shows the marks of being both Palestinian and Greek – in contrast with the Qumran literature which is Palestinian and Hebrew. I am not convinced that this simple difference has been given sufficient weight.’

Kilpatrick’s conclusion about St John is worth quoting:

What have we learned about him? A poor man from a poor province he does not seem to have been a bookish person. In Greek terms he was uneducated with no contact with the Greek religious and philosophical literature of his day. This creates a problem: how does a man without these contacts have so many apparent similarities to a writer like Philo in his thought? As his material conditions as far as we can elicit them indicate a man of Palestinian origin it seems reasonable to look for the background of his presentation of the Gospel there. Our sources of information will be the LXX and related works, the literature of the Qumran and the Rabbinic texts especially the traditions of the Tannaim. On other counts we arc being forced to recognize that notions we have associated with Hellenistic Judaism were not unknown and not without influence in Palestinian Judaism in the first century AD.

Robinson’s conclusion on the date is as follows:

If we take on board the witness of the early Fathers, then there is no evidence of any ‘community’ at work in the writing of the Gospel. Possibly our earliest independent witness is Papias of Hieropolis, writing in the early second century, and acquainted with those who had talked with the Apostles and other eyewitnesses. What survives of his prodigious output are small fragments embedded in Eusebius. Using this material, and analysing the text, scholars such as Martin Hengel and Richard Bauckham have challenged the views of more liberal scholars, that the book was a compilation, and even the view of Raymond Brown that it was the product of a ‘Johannine community’; Bauckham attributes it to the ‘John the elder’, who is mentioned by Eusebius as the author of ‘Revelation’.

Their arguments are ingenious, but unnecessary, and they do what is all too common in modern scholarship, fail to take into account the authorial voice. It would be very hard to read John’s Gospel and not assume he was the one who had leant on the Lord’s breast at the last supper. If (and Hengel and Bauckham suggest) this John ‘the elder’ was prominent enough in the church to have produced 4 or 5 books of the New Testament Canon, surely more steps would have been taken to distinguish him from John the son of Zebedee. The early church went to great lengths to distinguish between James the brother of Jesus and James the son of Zebedee, and between the numerous men named “Judas.” It seems strange that ‘John the elder’, the author of five conical books, would have falenl off of the historical radar. (Note also the distinction in the Synoptics between John the Baptist and John the son of Zebedee. If it weren’t for the latter John, perhaps John the Baptist would just be known as “John.”)

I can see no reason to suppose that in place of the eye-witness of the Last Supper we need another chap called ‘John’. It reminds me of the old joke that the Illiad wasn’t written by Homer, but by another fellow of the same name.