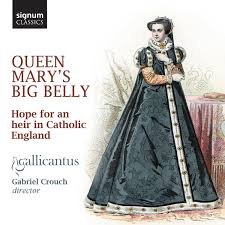 I have been listening to one of the most sublime recordings of ELizabethan music I have ever heard. It is by Gallicantus and can be heard on Radio 3 here for a short while yet. Called ‘Queen Mary’s Big Belly’, it celebrates that short period in 1554 when English history could have taken an entirely different route; on the basis of that one event, everything could have changed.

Mary, the first queen regnant in English history, was the eldest daughter of Henry VIII, and the only surviving child of his first (and longest-lasting) marriage to Catherine of Aragon. As a woman, her younger brother, Edward, took precdence, but when he died without an heir in 1553, she came to the throne. There was an attempt by Edward’s ministers to stop her, because, unlike Edward and Henry, Mary remained a faithful Catholic. Even though she was, at one stage, disinherited, and even though it could have cost her the throne, Mary remained faithful to the Church. Her advent to the Crown transformed the position of the Catholic Church in England. Altar-pieces and reredos and statues which had been carefully hidden away under the iconoclastic reigns of Henry and Edward, were brought out, dusted off, and restored, and the old Missals were also brought back into the light of day; much had been destroyed by the philistine Protestants, but new Church plate was made, and England, which, for the most part, had consented sullenly to the religious policy of Edward, happily went back to the good old ways.

Mary was 37 when she came to the throne, and already, by the standards of the day, elderly to be contemplating pregnancy. She married quickly – her cousin, Philip II of Spain, and in 1554 it was announced that she was pregnant. The child, if it had been male, would have been the heir to the throne of England and Wales, and to the great Spanish Empire; any son of that union would have been a figure of world importance. For a while it seemed as though God was smiling on Queen Mary and her husband, and the music on the album reflects the music created in that environment, such as Thomas Tallis’s Missa puer natus est along with the fascinating interaction between the choirs of the English Chapel Royal and the Spanish Capilla Flamenca. But it was not to be. The pregnancy was a phantom one, and when Mary died in 1558, at the age of 42, she died childless; the throne went to her Protestant sister, Elizabeth, and with that all hope of England returning permanently to the Catholic fold vanished. Under the logn Protestant ascendency, Mary’s reign was portrayed as one of great violence against the Protestants, when, in fact, it was no more so than that of her successor or two predecessors; but history, was we know, is written by the victors.

In fact, by the final year of Mary’s reign, the number of trials and burnings was declining, and Eamon Duffy is of the opinion that the relatively small rump of ardent Protestants had either decamped to Holland, or decided to weather the storm; the majority of the population seemed quite content to see the old religion back again. But it was not to be, although it took a campaign of State enforced terror during Elizabeth’s reign to ensure that was the case; not, of course, that anyone ever called her ‘Bloody Beth’.

Whatever one’s views on the history, I recommend the music – which is sublime.