Steve Brown posted this comment on my previous blog. In that blog I quoted from Kierkegaard which Steve took up.

“Life can only be understood backwards; but it must be lived forwards.”

Steve says –“For those of you that don’t follow Pope Francis with any depth, this article looks back four years so that you may understand his pontificate better. At that point you may come to better understand what he may do in the future.

You may want to sort the comments anyway you want and read a few.”

I followed the link all through and was surprised by much of it. Here is a quote from the beginning. This is what Steve Skojec says.

“I am admittedly oblivious to the minutiae of ecclesiastical dress or custom. I cannot, therefore, claim that my feeling was rooted in the observance of some obvious deviation from the protocols of a papal election. I did not notice, for example, that he chose not to wear the papal mozetta. I was not jarred by his unusual greeting of the crowd with a “good evening,” instead of something more spiritually profound. I can’t say I recall hearing, in those first moments, that he was a Jesuit. To be honest, I may very well not have noticed these things even under normal circumstances, but these were not normal circumstances. My impression of the man was something that took place on a visceral level. And the feeling was so strong, it distracted me from everything else.There was something in his face. In the way he stared down at the gathered crowd. There was something…wrong about his eyes. What I saw — what I thought I saw — was something other, looking out through that unreadable mask. Something triumphant, haughty, contemptuous, leering out at long last from atop the pinnacle of a long and hard-fought battle. It was incredibly strange. When I look back at the photo of that moment, I can see that there was no discernible expression on his face. What I saw was, I think, not so much something physical but more of a spiritual insight. It struck me, at the risk of sounding hyperbolic, as a preternatural experience. I was so unnerved, I had to fight down a wave of nausea.” Steve Skojec. 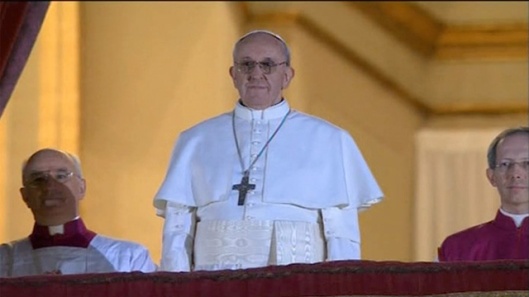 I studied that photo and all I can see is an elderly man looking down at his flock.

I read the entire article and can make no comment on it. However I do ask this question –

Was Steve Skojec the author of that article entitled to share what is a very personal impression he had of the leader of his Church?