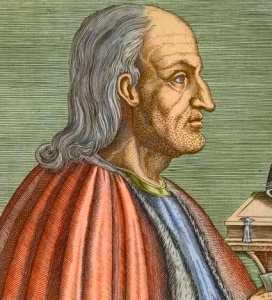 St. Anselm of Canterbury, in his Proslogion, made the first ontological argument, arguing as Wikipedia tells us:

That makes quite a lot of logical sense, at least to me. But it’s been argued down the ages, right until the present day.

Mathematician and logician Kurt Gödel when he died in 1978, left behind a series of calculations that purport to prove St. Amselm’s thesis. These, in fact:

Don’t look at me like that, nobody promised there wouldn’t be math, and if I had a thirty-foot ladder, well, maybe I could find the bottom of the pool. In any case, some explanatory notes:

Definition 1: x is God-like if and only if x has as essential properties those and only those properties which are positive

Axiom 1: If a property is positive, then its negation is not positive

Axiom 3: The property of being God-like is positive

Axiom 4: If a property is positive, then it is necessarily positive

Theorem 1: If a property is positive, then it is consistent, i.e., possibly exemplified

Corollary 1: The property of being God-like is consistent

Theorem 2: If something is God-like, then the property of being God-like is an essence of that thing

Theorem 3: Necessarily, the property of being God-like is exemplified

My course in introductory logic, and my math courses, both long ago, say that those explanations each and together make sense. But this isn’t new, after all, it came out in 1978.

What is new, is that “Christoph Benzmüller of Berlin’s Free University, who ran the calculations along with Bruno Woltzenlogel Paleo of the Technical University in Vienna, told Spiegel Online: “It’s totally amazing that from this argument led by Gödel, all this stuff can be proven automatically in a few seconds or even less on a standard notebook.”

They do say that, “The point of the researchers’ argument was that they were not directly trying to prove the existence of God, but rather to showcase the power of computers.”

Well, I guess they did both. Still, it’s far enough over my head that I think I’ll take their word for it, and continue to take God on faith, myself. It is interesting, though.

Gene Veith at Cranach, where I found the story, also notes that Gödel was baptized Lutheran, and remained a Bible reading Christian although he was not a member of any church.