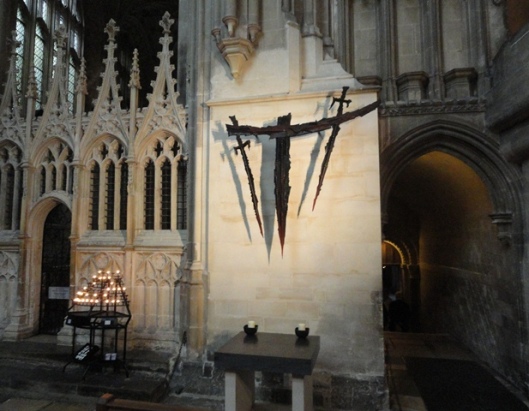 Today the Church celebrates the martyrdom of Thomas Becket, about whom I have written before on this date. His martyrdom was one of the most dramatic moments in the long struggle in the West between Church and State. Unlike in the Eastern Roman Empire, where the Patriarch of Constantinople was firmly under the thumb of the Emperor (a pattern continued in the Romanov Empire and its successors), in the West, after the fall of the Roman Empire, the relationship between monarchs and the Church was a contested one. It was no accident that it was under St Pope Leo the Great that the Petrine claims were systematised and promulgated – these claims provided a firm basis on which to resist the claims of the monarchy to control what the Church did and who was appointed to its offices. Throughout the next thousand years the struggle continued, with monarchs using violence to promote their claims when all else failed; several times the Kingdom of England was put under interdict by the Church, with Henry I, Henry II and King John all finding themselves at odds with the Church. Ironically, it was only with Henry VIII that, in England, the King won the day, and that was at the price of breaking with the Universal Church and settling for a national church with the monarch as the spiritual head; a less unlikely spiritual role model than Henry VIII is difficult to imagine, but the advantage of being an absolute monarch with an army at your back is that few will say so.

The English Reformation was the greatest act of cultural vandalism this country has ever suffered. It is estimated that more than 97% of all art work in the country was destroyed. If you want to get some idea of what happened, your best comparison would be with what ISIS has done in the areas it has controlled over the past couple of years. Animated by the same bone-headed stupidity that animated the Iconoclasts in the Eastern Roman Empire and the Cromwellian Puritans (and some more recent philistines), Thomas Cromwell’s men destroyed works of art designed and created to glorify God. Failing to understand what one might have thought even an ape could grasp, that there is the world of difference between worshipping God and creating works of art in His honour, these moronic philistines destroyed the material culture of a millennium, and transformed our parish churches from being colourful parts of the community to whitewashed preaching barns. As one expert has written:

Statues were hacked down. Frescoes were smashed to bits. Mosaics were pulverized. Illuminated manuscripts were shredded. Wooden carvings were burned. Precious metalwork was melted down. Shrines were reduced to rubble. This vandalism went way beyond a religious reform. It was a frenzy, obliterating the artistic patrimony of centuries of indigenous craftsmanship with an intensity of hatred for imagery and depicting the divine that has strong and resonant parallels today.

Just as the English barons had united with the Church to thwart John’s plans to make himself an absolute monarch, so, too did their descendants unite to thwart Charles I and James II’s plans to the same end. The gloomy rule of the Puritans under Oliver Cromwell lasted precisely as long as his powerful presence and his armed force, and no longer. The Monarchy ended up with its wings clipped, and the Church of which the monarch remains the spiritual governor has ceased to have much influence on the nation and declines year on year in attendance.

The relationship between Church and State will always be a vexed one. It is in the nature of Caesar to want to dominate the whole of the public realm, and in our own time, it may even be the case that having an Established Church with the monarch at its head actually preserves England and the UK from the sort of full-scale assault on Christianity which could easily come from an aggressively secular State. Moreover, it would be foolish to ignore the cultural and religious contribution which Anglicanism has made to the creation of a society where, until recently, it was considered immoral to let the poor and sick to their own devices. It would be equally unhistorical not to acknowledge that where the Church has dominated societies, it has not been a good experience for many in those societies.

All that said and acknowledged, a society in which men and women stand up for the rights of the Church is a better one for that fact, and today, as we remember St Thomas of Canterbury, let us also remember all those in this fallen world who bear witness through their suffering to their faith in Christ.