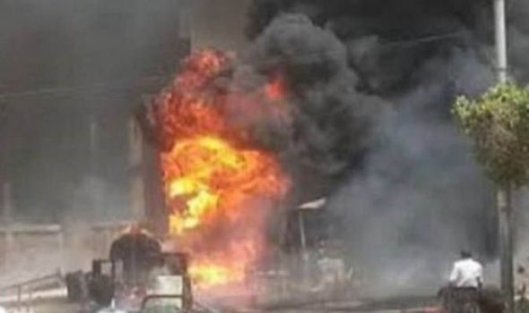 Chalcedon put it quite plainly in his The persecution continues. He also gave us the background of the situation. Without denigration, because how we got here is always relevant, that’s all well and good. But where is this likely to go? ABC (The American one) reports thusly:

It was among the deadliest attacks to ever target Egypt’s Coptic minority, which makes up around 10 percent of the country’s population and strongly supported the military overthrow of an elected Islamist president in 2013, which was led by el-Sissi.

Rather trite, in my opinion, to blame the victims, still again, in a conflict which has been going since the eighth century. But that’s the news media today.

Since then, Islamic militants have carried out scores of attacks mainly targeting the security forces, while the government has waged a wide-scale crackdown on dissent.

Dissent? ABC news describes an attack in a church, that killed at least 24 people, 22 of them women, by a not-so-smart bomb as dissent. What would it take, a nuclear device, maybe a biological weapon, to raise it to the level of terrorism? Oh, of course, then the motive would be “unclear”. Especially if you hide under your bed with your eyes closed.

Speaking after a state funeral for the victims, el-Sissi identified the bomber as 22-year-old Mahmoud Shafiq Mohammed Mustafa, and said three men and a woman were arrested in connection with the attack, which wounded 49 people. Two other suspects were on the run, he added.

Ordinary Egyptians are, I would bet, just as horrified and outraged as the rest of us. There is quite a history in Egypt of Moslems and Christians working together, and grieving together, after this sort of an attack.

And you know, al-Sisi did hit all the right notes at the state funeral (yes, you read that right, a state funeral for Christians in a Moslem country.

“This strike really hurt us and caused us much pain, but it will not break us. God willing, we will win this war.

As long as we are together as one, we will definitely win, because we are people of goodness, not evil, and people of building, not destruction.”

The coffins were wrapped in Egyptian flags. Pope Tawadros II, spiritual leader of Egypt’s Orthodox Christians, and top government and military officials attended the funeral, held amid tight security provided by hundreds of army soldiers. Earlier on Monday, the Coptic community held its own funeral service.

“God, protect us and your people from the conspiracies of the evil ones,” Tawadros prayed after waving incense over coffins lined up in front of the altar along with crosses made of white roses. “It is the destiny of our church to offer martyrs.”

Only victims’ relatives were allowed to attend the service at the Virgin Mary and St. Athanasius church in the eastern Cairo suburb of Nasr City. Some screamed out in grief or shouted out victims’ names, while the rest sat in silence or quietly wept.

Outside the church, a crowd scuffled with security forces when they were barred from attending the service.

It seems to me, that if Egypt has a future, or for that matter peace does, people like al-Sisi are the ones that might just be able to make it happen, as opposed to those who attempt to destroy and eradicate.

Just yesterday Foreign Policy published an article blaming the ongoing attacks on Egyptian Christians on their support for President el-Sisi.

Egypt’s beleaguered Christians thought their new president would save them. He’s doing nothing of the sort. https://t.co/Fauxq6p9nl pic.twitter.com/08lcuoz7R7

Nice, eh? Then there is this:

Ken Roth, the executive director of Human Rights Watch, used that article as an opportunity to also attack Coptic Christians.

Always nice to know what our foreign policy and humanitarian ‘elites’ think, isn’t it?

Blessed are the peacemakers: for they shall be called the children of God.