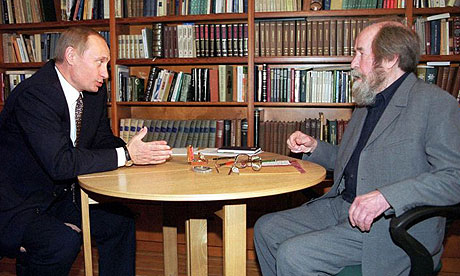 Here is the other one of Jessica’s from Christmas week on Neo, regarding Solzhenitsyn. The first is here. It is not comfortable reading, and given the topic it should not be. I do think it is both relevant and correct, and does outline, perhaps some of the unease we feel at the moment. In any case, the two posts were designed to go together, and they hold up immensely well, so enjoy.

The last few days we have been looking at two voices from the East – President Putin and Alexander Solzhenitsyn; in many ways they are far apart as you could want, but in another not; they both offer a critique of Western consumerism which derives from Russian Christian sources.  Putin may be doing this for a number of reasons, but the origin of his criticism is the same as Solzhenitsyn’s – which is the conviction that man is not at the centre of his own universe; whether Putin believes it, who can say? That Solzhenitsyn did is clear.

One of the most potent points Solzhenitsyn makes is that:

in early democracies, as in American democracy at the time of its birth, all individual human rights were granted because man is God’s creature. That is, freedom was given to the individual conditionally, in the assumption of his constant religious responsibility.

When America’s Founding Fathers separated Church and State they did not do so because they were atheists or thought Christianity wrong, they did so because they did not want one Church to dominate in their society; they do, indeed, seem to have assumed that man would be bound by the responsibilities which the Christian faith laid upon him; realists, they did not think man would always live up to these, but they did not see freedom as license; can we now say that of ourselves and our leaders? What is it which binds us?

Here, Neo often excoriates modern political leaders for what is essentially their lack of courage and morals. By that last he isn’t just talking about sex, he is talking across the range of things which ought to bind leaders: a concern for honesty, integrity and truth. Modern political leaders seem to have discovered that these things can be dispensed with, as long as it is not done ostentatiously; and they wonder why the electorate is disillusioned with them and their leadership?

Solzhenitsyn’s critique is a Christian one:

There is a disaster, however, that has already been under way for quite some time. I am referring to the calamity of a despiritualized and irreligious humanistic consciousness.

Of such consciousness man is the touchstone, in judging everything on earth. Imperfect man, who is never free of pride, self-interest, envy, vanity, and dozens of other defects. We are now experiencing the consequences of mistakes that were not noticed at the beginning of the journey. On the way from the Renaissance to our day we have enriched our experience, but we have lost the concept of a Supreme Complete Entity, which used to restrain our passions and our irresponsibility.

For a true understanding of man’s real destiny, God is essential:

If humanism were right in declaring that man is born only to be happy, he would not be born to die. Since his body is doomed to die, his task on earth evidently must be of a more spiritual nature.

But if we refuse to recognise this, or think it of no importance, then we shan’t see any reasons for exercising any self-restraint save for that imposed by the law – and if the law is the only guide we have, then we have become a society without a spirit of self-sacrifice or restraint:

People in the West have acquired considerable skill in using, interpreting, and manipulating law. Any conflict is solved according to the letter of the law, and this is considered to be the supreme solution. If one is right from a legal point of view, nothing more is required. Nobody may mention that one could still not be entirely right, and urge self-restraint, a willingness to renounce such legal rights, sacrifice, and selfless risk: it would sound simply absurd. One almost never sees voluntary self-restraint. Everybody operates at the extreme limit of those legal frames.

It seems here that this light from the East says much about where we are as a society, and why there is, in all quarters, a feeling that we have somehow taken the wrong turning. Maybe it takes men speaking from a society which took the wrong turn for many generations to see this.  It may well take more humility than we have to be told it and to learn from it.  But when a Russian President says:

We know that there are more and more people in the world who support our position on defending traditional values that have made up the spiritual and moral foundation of civilisation in every nation for thousands of years: the values of traditional families, real human life, including religious life, not just material existence but also spirituality, the values of humanism and global diversity

then we can either point fingers and say who is he to talk? Or we can ask whether there is not something in what he says from which we might learn? The choice is ours.

11 thoughts on “Light from the East?”