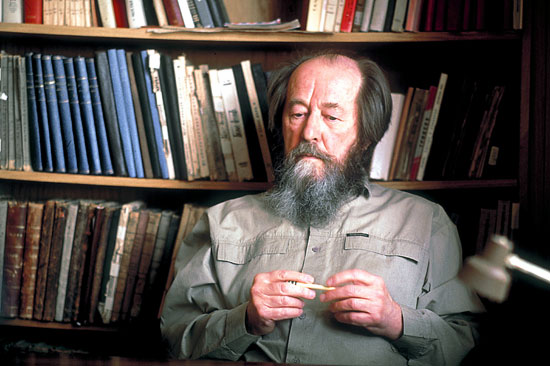 The post which follows, Jessica wrote for Christmas week in 2013 on NEO. It is one of those posts I referred to yesterday, and I like it as a follow-on for yesterday’s as well. It seemed a strange post for advent to me until I thought it through. She has much right here, I think. I’m a typical American, with all the individuality that sometimes goes with that – What’s that? Get off my lawn! But she and Solzhenitsyn are simply right. We were not created to be solitary figures, we were meant to exist in families at first which grew into communities. Remember this, the family started in the Garden, it is actually older than Original Sin, and that is why so many try to tear it down because, without that ancient tie, we are much more defenseless against all manner of evil things. Enjoy Jessica’s post, which I agree with completely..

The title is not mine and it is not new. It was the title used by one of the last century’s greatest writers and spirits, Alexander Solzhenitsyn, for his 1978 Commencement speech at Harvard. This came as a shock to the West at the time. Here was a man whom it had lauded as a hero of the Cold War, a moral giant who had exposed and condemned the Stalinist regime and its successors; in the face of his writing, the Left which liked to appease Communism fell silent, and the Right which loved to excoriate it celebrated him. But after his Harvard speech, his admirers were puzzled. Instead of thanking them and saying how wonderful the West was, Solzhenitsyn could not have made it clearer that he did not think that the best alternative to Communism was individualistic, humanistic capitalism. Any system which saw man as instrumental in a materialistic sense missed the point of human life: we are not here to be parts of the economic utopia or to consume, we are not an economic animal whose main point is to accumulate as much wealth as we can, or to consume as much as we can; there is nothing wrong with creating wealth, or even accumulating it – unless it is an end in itself. After all, the Good Samaritan could not (as Lady Thatcher once reminded us) have done any good had he not had the money with which to do it. Jesus did not condemn wealth, he feared its effects on the rich man, and he wanted it, like all of God’s good things, to be used rightly. A society which pursued wealth for its own sake and which makes money (or celebrity) an end in itself is not a good one.

America was founded on noble ideals, including the pursuit of happiness. Our wealth has become such that many citizens can get an unimaginable amount of material wealth, but, as he noted:

the constant desire to have still more things and a still better life, and the struggle to obtain them imprints many Western faces with worry and even depression, though it is customary to conceal such feelings. Active and tense competition permeates all human thoughts without opening a way to free spiritual development.

He saw a society in which:

Destructive and irresponsible freedom has been granted boundless space. Society appears to have little defense against the abyss of human decadence, such as, for example, the misuse of liberty for moral violence against young people, motion pictures full of pornography, crime, and horror. It is considered to be part of freedom and theoretically counterbalanced by the young people’s right not to look or not to accept. Life organized legalistically has thus shown its inability to defend itself against the corrosion of evil.

It is hard to see that nearly forty years later, things are any better; here, as elsewhere, Solzhenitsyn  prophesied aright. He identified the reasons for this very well:

Without any censorship, in the West, fashionable trends of thought are carefully separated from those that are not fashionable. Nothing is forbidden, but what is not fashionable will hardly ever find its way into periodicals or books or be heard in colleges. Legally, your researchers are free, but they are conditioned by the fashion of the day

The West was, he said, ‘spiritually exhausted’. The ‘human soul longs for things higher, warmer, and purer than those offered by today’s mass living habits, introduced by the revolting invasion of publicity, by TV stupor, and by intolerable music.’

The origin of this decadence lay, Solzhenitsyn suggested, in the anthropocentric views of man’s destiny which came in with the secular thinking of the Enlightenment. Man was at the centre of all things, and the ends for which he was meant were material ones:

Everything beyond physical well-being and accumulation of material goods, all other human requirements and characteristics of a subtler and higher nature, were left outside the area of attention of state and social systems, as if human life did not have any superior sense. That provided access for evil, of which in our day there is a free and constant flow. Mere freedom does not in the least solve all the problems of human life and it even adds a number of new ones.

But these are not the ends for which man is made, and so even if he reaches them, he is dissatisfied and his spirit unsatisfied. So it is that even in the richest society the world has ever known, even the rich lack what is needed to heal what ails them?  We can reject God and make gods of ourselves. But Solzhenitsyn did not see that as bringing us what we needed; and forty-five years on, we can see, even more clearly, that like Jeremiah, he was a prophet to whom few wanted to listen.

5 thoughts on “The Exhausted West?”