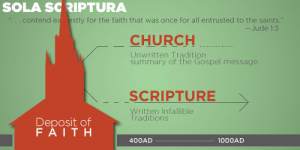 Gene Veith of Cranach reported an article the other day by Mathew Block, Communications Director of the Lutheran Church of Canada. I think it has bearing on the ongoing dialogue with Bosco, in which as we all know, he continually inveighs against the Church, usually the Catholic Church specifically, but in truth, all churches. Most of us realize as Chalcedon has said many times, “Christ founded a church”. And he did, Chalcedon’s definition differs a bit from mine as a Lutheran, but as America came from a reformed Great Britain, so too did Lutheranism come from a reformed Catholic Church. You could say much the same for all the other churches, in some form or another. We all hold some truths self-evident, for instance:

I believe in one God, the Father Almighty, Maker of heaven and earth, and of all things visible and invisible.

And in one Lord Jesus Christ, the only-begotten Son of God, begotten of the Father before all worlds; God of God, Light of Light, very God of very God; begotten, not made, being of one substance with the Father, by whom all things were made.

Who, for us men for our salvation, came down from heaven, and was incarnate by the Holy Spirit of the virgin Mary, and was made man; and was crucified also for us under Pontius Pilate; He suffered and was buried; and the third day He rose again, according to the Scriptures; and ascended into heaven, and sits on the right hand of the Father; and He shall come again, with glory, to judge the quick and the dead; whose kingdom shall have no end.

And I believe one holy catholic and apostolic Church. I acknowledge one baptism for the remission of sins; and I look for the resurrection of the dead, and the life of the world to come. Amen.

That’s all that is required to be a Christian really. All the rest is mostly about how to live that Creed, which we all do imperfectly.

But Veith’s opening perfectly summarizes Bosco, and probably many like him. “[…] He argues that part of the problem is a misunderstanding of the authority of the Bible.  People say the Bible is their authority, then consider that to be a license to interpret scripture any way they want to.  Instead of sola scriptura, we have solo scriptura.”

Because they privilege their own personal understanding of Scripture over the historic witness of the Church, it’s not surprising that Evangelicals deny that their congregation should have any meaningful authority over them: For example, 57 percent denied that their local church should have “the authority to withhold the Lord’s Supper from me and exclude me from the fellowship of the church.” In other words, Evangelicals believe the Bible is authoritative; and that authority is mediated by individual believers, rather than the church (even though the Bible explicitly says that authority is to be exercised by the church—e.g., Matthew 18:15-17, 1 Corinthians 5:11-13, Titus 3:10-11, etc.) […]

If instead we ignore the ways in which the Church has expressed its beliefs—if we ignore the ways in which God has shaped the faith of the Church historic through His Word—then we are really denying that the Scriptures are authoritative at all. We are in effect saying that we do not trust God’s Word to have acted on any Christians other than ourselves. Instead, we are elevating ourselves—our own hearts—as the ultimate judge, both over Scripture and the God who has shared that Word with the Church down through history. And that is heresy of the highest degree.

via: EVANGELICALS, HERESY, AND SCRIPTURE ALONE. Do read the whole thing.

I’m reminded that the Rev Dr. Martin Luther in his Homily for Trinity XIX, Church Postils said that, “God does not desire the Christian to live for himself.” I also doubt that he really intended us to live by ourselves either, without the community to keep us in check, and our pastors should be of large account in that community, otherwise we will undoubtedly come to see ourself as the final authority, supplanting God Himself in that role. And that is always the sin of pride showing itself.

There is something else here also, that G.K. Chesterton phrased far better than I can.

Tradition means giving votes to the most obscure of all classes, our ancestors. It is the democracy of the dead. Tradition refuses to submit to the small and arrogant oligarchy of those who merely happen to be walking about.