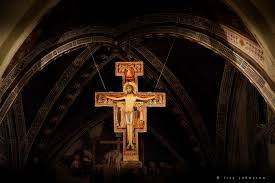 Our friend Bosco does not like religions. He knows Jesus personally and can’t see why it is necessary to have what he calls ‘costume holymen’ who misuse their infleunce over what he takes to be the credulous. It is a variation on a theme one often hears from atheists and even agnostics – one can be ‘spiritual’ without going to church. If the question were to be asked ‘are you spiritual?’ there would be more positive responses than there are to the question ‘are you religious?’ All of this supposes a spiritual practice centred on oneself – a form, if you will, of ‘well being’ – something which, if one if to judge by the book shops, is a popular genre. We live in a western world very much focussed on ‘me’, but from a very particular angle, one which might be characterised as ‘me as consumer’. One is either consuming goods, or conserving oneself in order to do so; the good life is defined in largely material terms. If it were otherwise, it might be that not quite so much ‘stuff’ needed to be consumed – and where should the current economic model be then? That may be a trifle cynical, but it is not a million miles removed from where we are.

The traditional Christian model does not start from me, it starts with the truth that God exists, that he has manifested himself at various times and in various places, and that the fullest revelation he has given us is through Jesus Christ. It does not proceed from what might be call a privatised view – that is that each of us has his or her own personal revelation, but from what might be called a corporate point of view, which is that Jesus founded a church, and did so for a reason for a reason. He did not, though he might have chosen to, write a book in the manner Mohammed did. The Church preceded written scripture, and that Church was able to determine which of the many writings surviving from the early days of the church were authentic revleations of the Apostolic deposit. Paul himself commended written and oral tradition to his churches; indeed, Paul founded churches. There is no recond of any of the Apostles saying to anyone ‘get on with it as the Spirit moves you’? Indeed, we see constant warnings from the writers of the New Testament about the dangers of unahgtorised teaching – ‘another gospel’ Paul called it. We see in St John’s anguished letters other teachers daring to say that even the’ beloved disciple’ had got it wrong.

What they thought he had got wrong was the issue which would cause controversy for centuries – which is who Jesus was? It was easy, because it was comprehensible by the human mind’ to say he was the ‘Son of God’. That meant he was a creature, the best of the creatures, but not God himself. John called those who taught thus ‘antichrists’, and his teaching, like that of the other evangelists was that Jesus was God. How could that be without positing more than one God? It was around that question that most of the bitter early dispute centred. The Church wobbled from time to time, but thanks to St Athanasius and other brave men and women, it held to that truth passed on. It formulated the dogma of the Trinity, which no one would be so unwise as to say was easily comprehensible by the human mind; but then is is probable that the vastness that is God would be easily grasped?

My point here is a simple one. It might be that a human could come to these truths by direct revelation, but history shows God working through his church. Our religion is about God, who loves us and who redeems us through his son. It is not simply a private affair to be decided by our feelings. That runs counter to the modern fashion of course, but so much the worse for modern fashion.

22 thoughts on “Why religion?”