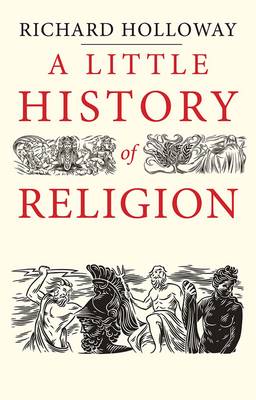 The former Primus of the Scottish Episcopal Church (1992-2000), the Right Rev Richard Holloway has just published a book called A Little History of Religion (Yale, £14.99, pp. 244), which I reviewed for The Times, but since that is behind a paywall for many, I thought it might be worth sharing my thoughts on it here in a less formal setting.

The first thing to say is it is well-written book, and few will come away not knowing more about the religions of the world than they did before reading it. It is very much the product of its author’s own theological evolution, and its conclusions are not surprising to those who have read any of his last few books. Religion is the product of human imagination; it served our needs when we knew no better; it did some good things; it did more bad things (at least in its monotheistic forms); and it is now on its way out. Long before he announced his own conversion to a ‘post religious’ point of view, Holloway had seemed almost a caricature of the progressive, self-consciously ‘modern’ cleric, who never saw a ‘progressive’ cause he couldn’t support, or an orthodox Christian position he could. Naturally he was a frequent broadcaster on the BBC, and often asked to contribute to newspapers and magazines; he was the very model of modern bishop. In some ways the caricature was unfair. He thinks deeply about what he writes, but if it ever really existed, somewhere along the way, his faith in the redeeming power of Christ faded away. That viewpoint dominates the book.

The connection between such a character of church leadership and the state of the Church in the modern West would make an interesting study; whatever their personal virtues, men who do not really believe in Jesus except as an interesting moral teacher cannot make good shepherds. What they can do, however, is to spread doubt and encourage those who would do the same. The hungry sheep look up and are fed stones. Holloway’s teleology is a common one. With the advance of science and the spread of better education, religion has had its day. But let us stop here for a moment. For an author sensitive to the cultural imperialism of some religions (including the one he used to belong to), this is a strangely Western viewpoint, ignoring the fact that Europe is very much an outlier in global terms. The notion, once common (and implicit here) that the rest of the world would surely follow the enlightened example of the West, gets little support from an example of trends outside the Western world, and even there, his (to him) optimistic conclusion that religion will be replaced by ‘secular humanism’, seems doubtful on a long-term projection of demographic trends, which see Islam becoming steadily more important. Since he is critical of the founder of Islam for using war as an instrument of his spiritual purposes, one might have expected a pause for thought here.

Holloway’s technique, like his prose, beguiles. He takes what he calls a ‘zig-zag’ approach, which could, in less skilful hands, have been disastrous, but which, in his own, offers us an interesting path through the subject, beginning with why humans have always needed a God or gods (a phenomenon which might have detained him for longer had he offered us some reflections on its implications) then proceeds on an erudite pilgrimage through the world’s religions. It is easy to spot his favourites. He likes those religions which he thinks sit most lightly on their devotees and which align them (in his view) with Western environmental concerns, so the Jains, with their renunciation of desire and refusal to make judgements about right and wrong, like the Quakers (for not dissimilar reasons) score highly with him. The religion of the Native Americans inspires one of his few rhetorical flights (‘They had a sacred connection to the land that sustained them … They felt themselves to be enclosed in a living mystery’), and he writes movingly of their ‘crucifixion’ at the hands of the slave-owning colonists, without noting their own slave-owning habits and some of the less desirable manifestations of their culture

If, at times, this comes close to being an A-level primer for ‘World Religions’ (with better prose but no illustrations), it is also curiously dated in its treatment of Christianity. With the exception of a mention of the Eastern Orthodox Church, his Christianity is that of the West, and his treatment of that fails to reflect the scholarship of the last thirty years. Despite the work of scholars like Eamon Duffy, Holloway still gives us a Catholic Church on the eve of the Reformation that was corrupt and in decline, and persists in writing as though in England it was all about Henry VIII’s libido. His Reformation story is mainly about England, which allows him to deal with America, but from this point on, there is a sense that the book loses its global ambitions and becomes about the Anglosphere. Here, as ever, he has interesting asides about some of the stranger manifestations of apocalyptic belief, charting the myriad disappointments of those who have preached the end of the world; one day, no doubt, their moment will come.

As Hollway eases us into the modern period, his focus remains Eurocentric, both in the areas he treats and the way he treats them. Naturally, he approves of the Ecumenical movement in Christianity, but seems to see it as the antechamber to his favoured ‘secular humanism’, as it perhaps was for him and has been for others. He has predictably hard things to say about fundamentalism, which shades into disapproval of any church which fails to accept the dictates of twentieth-century Western liberal humanism. This gives the impression that, in a very unecumenical way, he fails to understand the theological arguments against women priests, or (more likely) considers them spurious and self-serving excuses not to do the right thing (as he sees it).

In the end, Holloway offers us a period-piece to which people will react in different ways: to those who suspect that some bishops have never quite believed what the men and women who pay their salaries believe, this book will offer succour; to those who stick with the secularisation thesis, it offers hope; and to those who think religions are a bad thing, it offers ammunition. But for anyone wondering about the significance of the fact that across the globe, religious belief is rising, and for those wondering about the effects of that even in the West, there is nothing to be had from Holloway; he knows what he knows with a certainty which was lacking in his Christian faith. This is a book which starts by asking the biggest questions, but it ends with the most trite and conventional liberal answers.

[This is a longer version of a review which appeared in The Times on 20 August].

10 thoughts on “The history of religion”