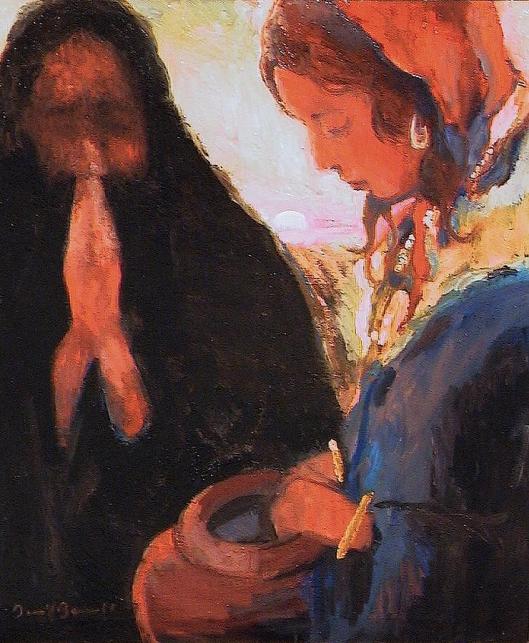 The Woman at the Well by Daniel Bonnell

We are so familiar with the story of Jesus and the Samaritan woman that we might miss how revolutionary it is in terms of the world in which Jesus lived. Most orthodox Jews would have chosen to avoid passing through Samaria and would have taken the long way round to Galilee, for the inhabitants were considered unclean. The Samaritans descended from people who had cooperated with the Assyrians years before, and when in exile had adopted some of the customs of that place – bringing them back to their old homeland when they returned – including the worship of other gods. The Samaritans married with Gentiles and non-Jews, as well as with Jews; orthodox Jews would, literally, pass by on the other side rather than encounter them; if they had no choice but to meet them, they would seek ritual cleansing afterwards. Yet Jesus not only passes through, he strikes up a conversation with a Samaritan woman, and as if that was not bad enough, one with a chequered past and a morally dubious present – five husbands had come and gone, and the man she was with at that time was not her husband. The fact that she came to the well in the midday sun, when no one else would be around, suggests she was an outcast even in her own community.

In the Old Testament, as in the New, ‘marriage’ is often used as a metaphor for God’s relationship with his people. So, when Jesus asks her to get her husband, we might also read it as a reference to God, and her being a Samaritan, it is no surprise she has more than one. Jesus tells her that the old ways are giving way to the new, and that the Temple – on whatever mountain it might be (and there was more than one in Samaria) – would cease to be the centre of devotion.

Jesus is the living water, and yet he begins by telling her he is thirsty and asking for a drink. But it soon becomes clear it is not water he is thirsting for. He does something unusual, he takes her seriously, and he converses with her. She takes time to catch on, talking literally about water and buckets, her mind is on worldly concerns. But when Jesus talks about the living water, she begins to catch on that there is something life changing going on. She is not thirsty just because of the midday sun. But she hesitates, and turns back to talking about being freed from having to come to well everyday; she hears, and she hesitates – as so many of us do. But Jesus persists, and she comes to know him.

We know from our reading of the Gospel that Jesus is the Living Water, but that it could only be given in its fullness by the Holy Spirit when Jesus was glorified. That was accomplished on the Cross when blood and water flowed from his crucified body. It is not accidental that this conversation takes place at midday – the time Jesus would be crucified, when, again in the burning sun, he would cry out “I thirst“.

What sort of life do we want in our own time? Jesus alone offers the Living Water which quenches that thirst for God which wells up in us in this dry desert we inhabit. In our Western tradition we know neither the woman’s name, not what happened to her except she proclaimed the name of Jesus, but in the East she has a name and a history. She is known as Photini – the Enlightened One, and is said to have been one of the first missionaries, travelling as far as Rome where she gave her life as a witness to the Faith under Nero’s persecution. The Orthodox prayer to her is a good way to finish this meditation:

Illuminated by the Holy Spirit, All-Glorious One,

From Christ the Saviour you drank the water of salvation.

With open hand you give it to those who thirst.

Pray to Christ for the salvation of our souls. Amen