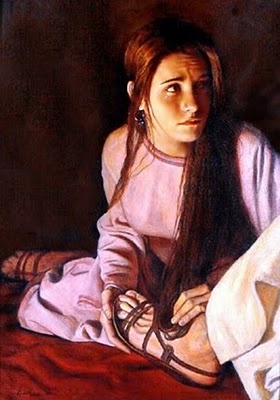 There was an unusual tenseness in the air as Martha lit the candles. There were rumours coming from Jerusalem that the Pharisees wanted to act against him; those rumours disturbed us all. He was stopping in Bethany on his way to Jerusalem, and Simon the leper, whose house was big enough to accommodate us all, was putting on a feast – with Martha’s help. As ever, she was bossing us all about, making sure everything would be perfect for Jesus – her love for him had, like mine, grown to immense proportions since he saved Lazarus, our brother. But I could see that her hustle and bustle masked the tension she felt – what if the authorities did seize him?

I lit the candles (always in the light, Martha commented tartly). They flickered and cast shadows on the walls – and when he and the others came in, it was as though the walls were inhabited by a cast of characters – black shadows, distorted – and the candles flickered – one went out, and I relit it. They ate – they were hungry. But there was something else which drove that hunger – the same anxiety I had felt coming into the house. The men were fearful of what the next few days would bring, but they made light of it, as men will when there are women present; but I knew, I sensed it.

I went to where I like to sit when Jesus is with us, at his feet. My sister thinks this is scandalous; I don’t know if that’s because it means I get out of taking the dishes away, or because she thinks a single woman should not sit in that position with a man. I saw his poor feet. No one had bothered to wash them, and they were dirty, and I could see that the heels looked sore. On an impulse, I took the alabaster jar of spikenard which I had received as a gift, and I broke it open and rubbed it into his feet, cleaning and smoothing them. The air was filled with the sweet perfume, which attracted the attention of others to what I was doing. Martha shot me such a look, which turn to anger when I let my hair down and used it to dry his feet – was that because she thought I ought to have had a towel with me – or because women did not let their hair down in public – maybe, as usual, I’d failed on both the practical and the moral fronts. I didn’t care. Jesus looked so careworn and almost sad, and he relaxed so much as I began my ministrations: love comes in many forms. In this place, at this time, this seemed the thing to do – so much so that I poured the rest of it onto his hair and massaged his shoulders. I do believe if looks could kill, the one Martha shot me at that point would have been the last thing I would have seen in this world.

It wasn’t only Martha who looked and acted as though I’d done something awful. Our host, Simon made a nasty comment to the effect that if Jesus really were a prophet, he’d know what sort of woman I was – a dreadful sinner. Jesus was unworried – he knew me well enough, and he told one of his wonderful stories, asking whether a man who owed a lot of money and was forgiven his debt would be more or less grateful than a man who owed a little and was forgiven it? That brought tears to my eyes – they fell onto Jesus’ feet, and I dried them with my hair, and kissed them. There was a noise from Martha that sounded like an explosion. I didn’t care, I was lost in the moment. I suddenly knew this was the last time I would do this for him – alive.

I like most of his followers, but Judas is an exception. He’s a nasty, grasping fellow – as my backside attests, it isn’t just money he grabs; he says all the right things – most of the time, but I’m not the only one who finds him creepy; Martha can’t stand him either. So it would have been him who opened up his big mouth to complain about my extravagance in using all that ointment on one man – it could, he complained loudly, have fed a family for a year if we’d sold it. I didn’t like to mention it was my ointment – but then I didn’t want to say how it had come to me, either – no one would ever give Martha such a gift.

But Jesus responded with words burnt into my memory. He tasked them quietly but firmly with not understanding – and then with what he said, showed me the full understanding of what I had just done. I had, he said, done it out of love for him, and to prepare his body for burial – and wherever the story was told, I would be remembered in it. That last I only understood when I saw what brother Luke and brother John Mark wrote in their books – I am told that Levi-Matthew also wrote about me, but I have not seen it, and unlike Luke, he never asked me for my version of what happened that night.I wonder if young John will mention it – I should like to see him again, but I am told he is in the far north somewhere with mother Mary; he was a sweet young man, so kind and gentle; I miss him.

What happened, what really happened, I can tell no one, because I do not have the words to describe how my heart was opened when he said that my sins were forgiven. I had not dared to ask – how could I? Simon the leper was right, I was a bad girl who did bad things. But Jesus, Jesus had known, and he had seen into my heart. My last memory will be of how he turned to me and said “Your sins are forgiven.” That caused a bit of a fuss, and I heard Simon, I think, ask who Jesus thought he was that he could forgive sins. But I recall those words now, all these years later: “Your faith has saved you; go in peace.” It had, I did.

16 thoughts on “Bethany: a meditation”