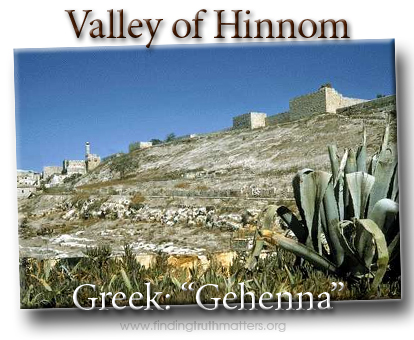 We have been discussing hell a lot here, and I have been doing a bit of reading on the subject. Dave Smith and I (and Ginny) have had something of a back and forth on this (300 comments and rising!) and rather than leave everything in the comboxes, I thought I’d share some thoughts. Right up front, let me say I am not denying the reality of hell, but what I am doing is interrogating the view that it is a place where souls, or souls and bodies, burn for eternity.

So, let us have a little look at that four-letter word – hell. It is not used in the Greek or the Septuagint – so we do not find it anywhere in the original Bible. What do we find? We get four words (the links are to Strong’s concordance so you can check I am not making this up as I go along):

It depends, of course, on which English translation you use. The most common one, the King James Version, has the most uses of the word ‘hell’ – some 54 occurrences – you can see from the link that others have far fewer. To put it into perspective, the Bible uses the word ‘heaven’ 664 times – in whatever version you choose. It may mean nothing that in most versions heaven is mentioned more times, but in most modern versions ‘hell’ gets 14 mentions, and the original word is one of those used above. So where does this get us?

Let’s deal with ‘Tartarus’ first and its one mention in 2 Peter 2:4. This, we are told, is a holding place for fallen angels before they are judged – so I think we can say with some confidence it isn’t any place anyone is going to spend eternity. That leaves us with the other three words which the older English translations call ‘hell’.

In the Old Testament, every translation is from the Hebrew ‘Sheol’. It means the abode of the dead. I cannot trace any mention in the Jewish sources to which I have access of anyone burning there for eternity. In English, ‘Sheol’ is translated variously as ‘hell’, ‘the pit’ and ‘the grave’ – and it is a place people can go into when they are alive, but in which they then perish. It is a place of the dead – there is no mention of anyone in it having any consciousness – or of them burning. Hades is mentioned 11 times in the NT, mostly as hell, but once as grave. But what sort of place is it? If we look at Acts we see a place which looks like Sheol – a place where the dead go and their bodies rot.

The only word used in the NT which has any connotation of burning is Gehenna. It is used 12 times in the NASB: Matthew 5:22; Matthew 5:29; Matthew 5:30; Matthew 10:28; Matthew 18:9; Matthew 23:15; Matthew 23:33; Mark 9:43; Mark 9:45; Mark 9:47; Luke 12:5; James 3:6. Gehenna was a real place – it is the Hinnom valley just outside Jerusalem. It was the place where the Pagan Jews erected their altar to Moloch. As a result, later generations used it as a rubbish pit into which all the refuse of the city was thrown, and where the bodies of those crucified were also thrown – and fires would burn perpetually to burn the remains and stop germs spreading. So, when Jesus refers to it in Mark 9 as the place where the worm does not die and the fire is not quenched he is speaking literally – those hearing him knew the place. There is no reference here to it being a place where any conscious being would dwell in eternal torment. Of course, for a Jew, the defilement of the corpse in such a place was a dreadful thing, and Christ is saying that even that would be better than sinning – but the idea that he is saying that those who sin are going to spend eternity suffering there is not in the text. If we look at the Lukan reference, where Jesus talks about ‘Him’ who destroys the body and soul in Gehenna, then that is a reference to God destroying us – not letting us live forever in torment.

Paul tells us the wages of sin is death, which he contrasts with the eternal life to those who believe. He does not say ‘the wages of sin is to burn in hell forever. Paul was steeped in Jewish teaching, and what he inherited was the idea of Sheol as a place of death and extinction. Psalm 1:6 told Paul and his fellow Jews that the Lord would know the righteous, but the ungodly would perish; it did not say they would burn in Gehenna. Psalm 37:20 made the same point – the wicked would perish, they would vanish away, and Psalm 69:28 underlines that – they will be ‘blotted out’ – not burnt in any lake of fire. They will be (Psalm 92:7) ‘destroyed forever’. This was standard Jewish teaching as we see not only from the Psalmists, but from Isaiah too. Malachai certainly mentions fire, but does so to say that the wicked will be burnt up and no trace of them will be left.

This was what the Jews believed, so if Jesus was telling them something new, one might expect much to have been made of this by Paul and the others – after all, if, as disobedience to God actually means spending eternity in a lake of fire, then that’s a message to get out there urgently, not least to the People of the Covenant who had no such concept. Yet we find St John, who certainly combatted heretical ideas in his Gospel and letters, telling us that those who do not believe in Jesus will perish, whilst those who do will have everlasting life; he does not say those who do not believe will burn in Gehenna. Paul makes the same point to the Philippians that the evil will be destroyed. The same message was sent to the Thessalonians (unless one takes the view that everlasting destruction does not mean that you are destroyed for evermore, but are subject to being destroyed for ever, and I can’t see why Paul would have meant that when there was no Jewish teaching to that effect) the Corinthians and, as I have already mentioned, to the Romans.

Paul seems to have known nothing of this Gehenna where the wicked would burn eternally, and neither he, nor James nor Jude nor Peter mention it. It would have been a big departure from what they had been taught, and one might reasonably have expected it to be emphasised. Instead there is a continuity with the Jewish teaching on Sheol. We shall be raised at the last and judged, and then, death and hell (Sheol) are cast into the lake of fire. They cease to exist, that is the second death.

How we read Revelation is always a moot point, and is one of the reasons the early Church fathers hesitated before accepting it into the Canon. ‘As late as 633, the Spanish Council of Toledo remarked how many people still opposed the use of John’s Revelation, and commanded that it must be read in church liturgies, under heavy penalty’, whilst to this day the Greeks do not use it in their liturgical worship. But it is there (although Luther had his doubts) and it tells us that hell and death are to be cast into the lake, as are those whose name is not written in the book of life, but only ‘the devil’ ‘the Beast’ and the ‘false prophet’ are condemned to eternal torment. One could certainly insist that everyone else in the lake would also suffer, but that would be a lot of weight to place on a notoriously difficult text.

Well, there it is, ‘heresy corner’ as Chalcedon has called it. I shall don my helmet and retire to my trenches with just one note. I am not denying the resurrection (pace ginny), neither am I saying hell is not real. I am simply trying to see how what the Scriptures say aligns with the Western belief that hell is a place of eternal torment. Yes, I am happier to think that God has so arranged things so that no one suffers for eternity; the faithless go down to the pit and are known no more; the faithful rise to life eternal.

63 thoughts on “Reflections on hell”