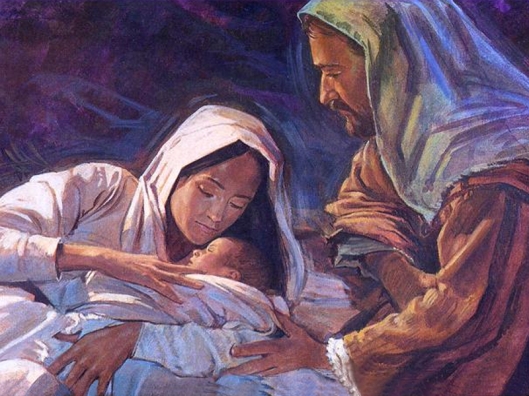 If we move away from the frustration we sometimes feel at how little the Evangelists tell us and concentrate on what they do tell us, then we can see the lessons which lie there for every generation. Mainly patriarchal societies have tended to focus on the men in the Bible, but the Church founded by Christ, however patriarchal the societies to which it has ministered, and however patriarchal it has been, has never been able to escape the influence of the Mother of Jesus. Mary stands there at the beginning of the story, even as she is there at its ending – and beyond.

Luke tells us that his Gospel is based on lots of evidence, including first-hand accounts, and there is nowhere else but Mary that the story he recounts in the first chapter of his Gospel could have originated; how marvellous to think that here we hear the voice of the Mother of Jesus. How understated and how modest is the person were there encounter; but how courageous. Where the father of John the Baptist, a Levite and one used to the Holy Places of the Temple doubted, and was struck dumb by the Angel of the Lord, Mary, who was, we must recall, probably only 14 or so at the time, responds with modesty – and courage.

She was a virgin, and if the accounts which date from as early as the second century are to be credited, she was a consecrated virgin; she did not see her life panning out as it did for most women of her kind; God had other ideas. Mary knew she could not be pregnant; like most girls growing up in the country, she would have known how babies were made. But the Angel told her that she was most ‘highly favoured’, and that she had been chosen by God to be the other of His Son.

We cannot know the turmoil this must have caused her. In that moment her life had been entirely turned around; whatever her plans, God’s plan came first. The ramifications of the words of the Angel were, perhaps mercifully, hidden from her. She would soon encounter the very first of them when her betrothed, thinking she had betrayed him, decided to set her aside. What a world of pain is hidden in that account in Matthew. According to the Law of Moses, Mary could have been stoned for adultery; we are not, here, far from the sort of society which we see in modern Pakistan’s Tribal regions. It was a mark of the righteousness of Joseph that he was not minded to put her to shame, or have her stoned; in that society it was a kindness to ‘set her aside’. We can only imagine the conversations and the pain it caused Mary and Joseph. But God, who had given Mary her mission, also now gave Joseph his; he was to protect the child of God and of Mary.

If we know precious little of Our Lady, how much less do we know of Joseph? Again, if we are to credit tradition going back to the time, rather than the later tales of men with an agenda, Joseph was an older man, one who may already have had children by a first marriage, some, perhaps all, of whom were older than Mary. So he had seen much, and this, too, in a quiet, and manly way, he accepted. It was not just Our Lady who assented to the word of God, Joseph did so too.

We may know little of this man, but we know enough to appreciate that Joseph was truly righteous. He stood by his pregnant betrothed, went with her to Bethlehem, was there at the birth, and led them into Egypt to escape from Herod’s men. When they returned, he earned a living for his new family, and was there at least for the first twelve years of Jesus’ life. The Jesus we see when his mission began was the Son of the Most High and of His blessed mother; but it is not, I hope, too fanciful to see in his courage, his steadfastness and his loyalty and love, reflections of his step-father’s character.

26 thoughts on “Mary and Joseph: a reflection”