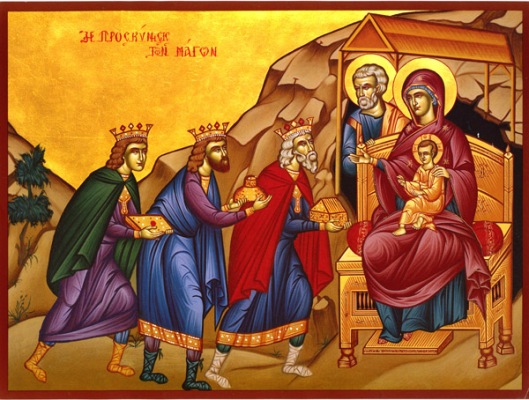 Theodore of Mopsuestia points out that Matthew brings forward various prophetic testimonies to show his fellow Jews that Jesus was the Christ foretold by the prophets. So Jesus fulfils the words of the patriarch Jacob:

The scepter shall not depart from Judah,
Nor a lawgiver from between his feet,
Until Shiloh comes;
And to Him shall be the obedience of the people

Thus was prefigured that what had been promised in Micah 5:2, which that Christ would come from Bethlehem, and that it would be in the days of Herod, who was not a Jew, but an Idumean; it was only when the kings and rulers from the Jews had ceased that the Messiah could be born.

Gregory the Great tells us that where the Jews received the words of the angel, for the Gentiles, who had not heard the word, a sign, the star, was given, this is in line with what Paul tells us in 1 Corinthians 14:22.

Chrysostom points out that it was not just the evil Herod who was troubled by the news, but also Jerusalem, because its people had abandoned the ways of the Law. As Isaiah had foretold, a child would be given to us and the government would be laid upon his shoulders. But the people had lost their way and showed no curiosity and so missed the birth of the true Messiah.

Gregory the Great tells us that Herod, ever crafty, resorted to lying to try to find out where the child was; but human malice is of no avail against the Divine Will. As the Proverb tells us: ‘There is no wisdom or understanding Or counsel against the Lord.’ God warned the Magi and they heeded him.

Chrysostom tells us that the star was no ordinary one, for it guided the Magi to a place where they would not normally have looked – a humble in with humble people in it. They found that for which they had searched. Their longing for the Anointed One was fulfilled. They recognised his divinity and worshipped him. They offered him the gold fit for a king; the frankincense which symbolises the fragrant pursuit of holy speech, and myrrh for the mortification of the flesh. God guided them back by another road, signifying the healing that would come to the Gentiles.

Gregory the Great reminds us that we cannot come to our heavenly home by the ways of this world, but by the Christ child alone. We cannot get there by our pride and will, but by weeping and obedience. Let our turning round be our repentance, and let us return by another road to God.

5 thoughts on “Feast of the Epiphany”

Listening in the Desert
Under Reconstruction