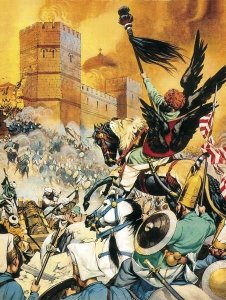 ‘All that is necessary for the triumph of evil is that good men do nothing’, is how Burke’s actual words:  “When bad men combine, the good must associate; else they will fall one by one, an unpitied sacrifice in a contemptible struggle” have come down in the historical memory. Yeats expressed something of this in his great poem The Second Coming:

The best lack all conviction, while the worst
Are full of passionate intensity

But Burke also reminded us that if we despair, we should carry on all the same. That is especially so for Christians.

This is not to take the line simply that we are citizens of another country and that we should not be ensnared to the lusts of this world; that I take for granted. But it is to say that the world is redeemed through Christ, and that being so, it is worth our defending the right and standing for truth.

‘The good must associate’, Burke said, well there’s the rallying call for Christians. We can ignore it, as we are tending to do, and we can wonder why, on every front, we are in headlong retreat; or we can express with passionate intensity our own point of view.

I’m not interested in fighting Catholics over the detail of where we disagree. We can see how well that worked for the defenders of Christianity in Constantinople in 1453. Those idiots who argued that it was better to have the turban of the Sultan than the mitre of the Pope effectively condemned thousands of their fellows to death and slavery. But Sir Stephen Runciman’s description of the final day of Christian Constantinople preserves a noble example all the same:

“The Emperor himself came to join in the procession; and when it was ended he summoned his notables and commanders, Greek and Italian, and spoke to them. (…)

“Constantine told his hearers that the great assault was about to begin. To his Greek subjects he said that a man should always be ready to die either for his faith or for his country or for his family or for his sovereign. Now his people must be prepared to die for all four causes.

“He spoke of the glories and high traditions of the great Imperial city. He spoke of the perfidy of the infidel Sultan who had provoked the war in order to destroy the True Faith and to put his false prophet in the seat of Christ. He urged them to remember that they were the descendents of the heroes of ancient Greece and Rome and to be worthy of their ancestors.

“For his part, he said, he was ready to die for his faith, his city and his people. (…)

Are we so prepared?

If we aren’t (and I doubt we are) then why are we not prepared to do the other – that is to combine when the enemy is in plain view. At the beginning of Evelyn Waugh’s Sword of Honour trilogy, the hero, Guy Crouchback, reacts to the news of the Moltov-Ribbentrop pact between the Soviets and the Nazis thus:

‘The enemy at last was in plain view, huge and hateful, all disguise cast off. It was the Modern Age in arms. Whatever the outcome there was a place for him in that battle.’

Well, waiting that long before resisting made the war when it came longer and harder than it needed to be. But at least, finally, there was an alliance against evil. Does it really take the appearance of a Hitler to produce unity? We could do (and are doing) worse than learn from Africa. The Word we once took there may yet return.

The hour is getting late, and perhaps every generation feels thus as it gets older. I shall not live to see the outcome of this, but I prophesy that unless there is some real resistance, the sapping and mining of all that Christians have held dear will mean that at least in this land, the cross of the redeemer will be replaced by the shopping mall.