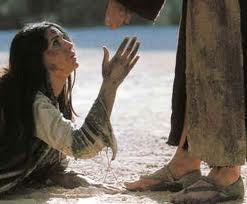 Back in June I wrote something about the story in this morning’s Gospel reading – the woman taken in adultery; I want to say a little more about it.

I can understand why some of the early copies of St John’s Gospel lacked this story, and it was, St Augustine who thought that might have been for pastoral reasons:

“certain persons of little faith, or rather enemies of the true faith, fearing, I suppose, lest their wives should be given impunity in sinning, removed from their manuscripts the Lord’s act of forgiveness toward the adulteress, as if He who had said ‘sin no more’ had granted permission to sin.”

Given some of the odd things which some Christians took the Apostles to have meant (just look at St Paul’s writings to the Galatians), one can see why St Augustine might have feared that people would have read the passage as a condonation of adultery.

In a way, I wonder whether that is one of the effects of modern liberal attitudes? For everything Jesus and our Tradition says about the evil of adultery and its sinfulness, could one really argue that it is widely regarded as a bad thing? Many vicars in my own Church are themselves on their second or even third marriage, and outside some parts of the Catholic Church, I can’t say I see adultery regarded as a bar to communion. I know that it is in the Catholic Church, but even there it depends on your priest – I know it shouldn’t, but I am not talking about what is in Canon Law, but about what actually happens.

The wider message of Our Lord is clear enough; He can forgive all sins; and you should go away and sin no more. Our vicar, who preached on this text this morning, had much to say on forgiveness and Grace, but he didn’t once mention the instruction to sin no more; I’d have thought that at least as important?

We know nothing about the woman, save that her circumstances meant she fulfilled the rather hard level of proof demanded by the Mosaic Law to prove adultery – that is she had been caught in the act by witnesses. There are still parts of the world today where a woman can be stoned for that same act – even if she has been the unwilling victim of attentions forced on her. We do not know whether that was the case here. It must have been a terrifying ordeal for her. Christ’s attitude throughout separates Him from the others. They are rushing to judgement; He is pondering; they have already made their minds up; He knows He will open those minds to their own sin.

Adultery is so common in the West that it suggests that for many the whole idea of marriage is next to an irrelevance. That is one reason why, during the recent discussion of same-sex marriage so many found Christian attitudes impossible to understand. If you do not see marriage as a sacrament, as a sacred contract between one man and on woman in the eyes of God, the mutual comfort of the same and for the rearing of a family, then you will see it as just another contract to be annulled or cancelled when you find a better product.

We do not know whether the woman sinned no more; we know we do.

40 thoughts on “Taken in adultery”