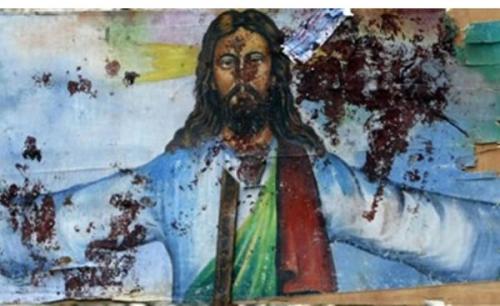 Do we learn from history? That depends on how much history we know. I’ve often heard people complain and say what a bad thing it was for Christianity when Constantine tolerated it and Theodosius made it the State religion. It is a view which is superficially attractive. After all, the interference of the State with the Church to which this led, and the interaction between the two led to some of the least attractive episodes in Christian history, including the burning by the State of heretics identified as such by the Church. So, easy and attractive to think that it would have been so much better had the Church remained ‘pure’ and ‘unspotted’.

That, however, ignores the situation which obtained before Constantine. In February 303, the Emperor Diocletian began the severest persecution of Christians known to that time in the history of the Empire. It became illegal for Christians to assemble together, churches were burned down and their contents destroyed, whilst the houses of Christians were ransacked. Any Christian who refused to renounce his or her faith was outlawed.   Maximian, who controlled the prefecture of Italy, enforced the decrees there with great severity.  Only in the prefecture of Gaul (which also included Spain and Britain) were the decrees not enforced. There followed years of persecution.

When Maximinus succeeded Diocletian in 305, he stepped up the persecution, and when he took over Italy in 311 he ordered the mutilation of Christians who failed to sacrifice to the gods. When the historian Eusebius describes some of the bishops attending Nicaea in 325 as mutilated, this was when it happened. Only Constantine’s victories in 312 brought this to an end. Had it continued, who knows whether the effect would not have been as bad as the persecutions of Tamurlame on the Church of the East nearly a thousand years later?

It is terribly easy, as the beneficiaries of seventeen hundred years of tolerance and approval, for us to bemoan the price which Christianity has paid for that; but I wonder if it is not also ungrateful?

There is no intrinsic reason why the Church in the West should not have shared the fate of the Church in the East. We have the example nearer to our own times of what happened to the Orthodox Church in Russia under the wicked and cruel Communist regime, where hundreds and thousands of martyrs were created, and where the Church ended up existing only because the State controlled it, and where, but for the Russian diaspora, an independent Russian Orthodox Church would not have existed.  We have seen similar persecution in China.

Our brothers and sisters in Christ in the Coptic and Syriac Churches have long suffered from the predations of their Muslim rulers. Whilst moderate Muslims, or secularists ruled those States, the persecution was not severe. As long as they did not mind being second class citizens and being subject to some restrictions, they could live in peace; but they could not make converts. But, as was the case before Constantine in the West, and as was the case with the Church of the East, when there is a change of regime and someone wishes to persecute them, Christians in such places are vulnerable.

We do not do enough to help them. But perhaps the days are coming when we, ourselves, will know what it is to live under regimes which tolerate us when we don’t annoy them, but which will be less tolerant than their predecessors?

5 thoughts on “Reflections on church history”