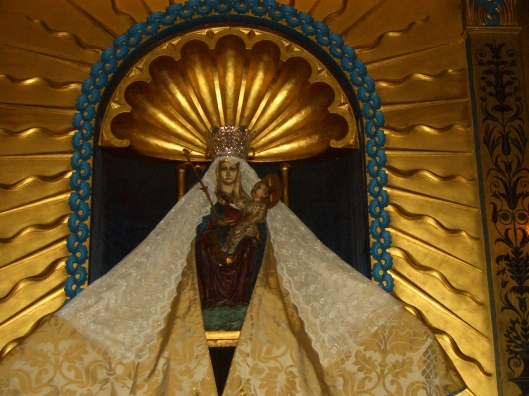 After saying a prayer to the Blessed Virgin, I made the sign of the Cross and entered the Holy House. Whenever I have been there before, there have always been people there; it was empty now.

The Holy House at Nazareth was rebuilt in Anglo-Norman England here, in this far corner of Norfolk – a testament to the piety of Richeldis de Faverches and the power and wealth of her lord. It was utterly destroyed by the vandals of Henry VIII. I cannot begin to imagine what the canons of Walsingham felt when they saw the famous statue of Our Lady taken from the sanctuary to be burnt in London. How could that have been for the faithful? How could even the rudest of soldiery not have felt the stain of what they did, as they transported the object of so much veneration to its fiery end? Eliot’s lines haunted me:

Water and fire shall rot
The marred foundations we forgot,
Of sanctuary and choir.
This is the death of water and fire.

When Fr. Alfred Hope Patten re-established the Anglican Shrine in 1931, he had a version of the Holy House included in the Church. The Oxford Movement, under Froude, Newman and Keble, reconnected Anglicanism to the long Christian Tradition of veneration of the Blessed Virgin, and Fr. Hope Patten took this to its natural culmination when the Holy House was reconstructed. Above the High Altar is a small replica of the statue of Our Lady of Walsingham (above),

It was as a reconstruction of the vision of the Holy house at Nazareth that the Shrine had originated; it was the healing miracles of the Shrine that had made it famous through medieval Christendom; it was love of Our Blessed Mother which had caused the Shrine to be refounded; and it was these things which had brought me here.

My love for the Blessed Virgin goes back as far as I remember. I always wanted to play Mary in the Nativity plays at primary school, and my mother used to tell the story of how, the year I achieved that ambition, I refused to change  out of the costume for a week – and would go round cuddling ‘the baby Jesus’ and telling people to ‘shush, He’s sleeping’. Goodness knows what my father thought, as he was not keen on religion, in the way only the English can be ‘not keen’. When I went to University, I was given the first of many Rosaries, and Our Lady helped draw me back to her Son; as she does all who will be humble and ask for her help.

It was to her that I had brought myself and my concerns. This is not because I can’t do it to Jesus – I do, all the time. But I don’t care what anyone says, women like to be able to talk to another woman, and I never knew any girl who did not want to have a good and loving relationship with her mother – whatever the reality life had given them.

Votive candles lined the walls, and burned in the lamps dangling from the roof. I bought candles for everyone I wished to pray for, including all readers of this blog, and especially for the brave Catholic Nomad Girl and NEO. By the time I had finished lighting them, it was as though the beacons of the Watchtower blazed from two rows of the candle-stands. There was a blast of heat from them on my face as I prayed for you all and for all those I love. The silence embraced me.

The Holy House was empty of other people, so I moved to the altar and stood in prayer before Our Lady herself. I prayed for her Intercession. Insights were asked for – and granted.

22 thoughts on “Inside the Holy House”